Bellevue's Vision Zero initiative aims to eliminate traffic deaths and serious-injury collisions on city streets by 2030. The Vision Zero Strategic Plan outlines how the city will achieve that goal. 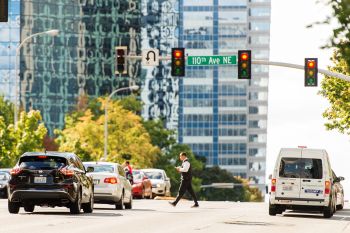 Vision Zero originated in Sweden in the 1990s, and its principles have since been adopted by numerous countries worldwide and cities nationwide. The movement is founded on the belief that deaths and serious injuries on city streets are unacceptable and preventable. In 2020, more than 38,600 people were killed in crashes on roadways in the United States, according to the National Highway Traffic Safety Administration, so the potential for saving lives is great.

The Safe Systems approach involves a new way of thinking about street safety. It is founded in the belief that death and serious injuries on city streets are preventable; they are not accidents. Crashes result from a set of design, infrastructure, and systemic issues, not just road user behavior.

The Bellevue Safe Systems approach is a way to organize the Vision Zero effort. It rests on four pillars (Safe Speeds, Safe People, Safe Vehicles, and Safe Streets) paired with four supportive elements (Data, Leadership, Partnerships, and Culture). This holistic approach accepts that people will make mistakes and that crashes will continue to occur, but it aims to ensure these do not result in serious injuries or fatalities. 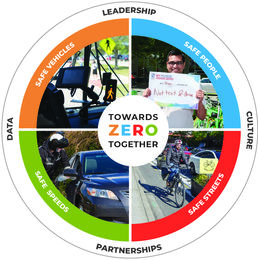 The City of Bellevue is committed to tracking progress toward its Vision Zero goals related to all eight elements of the Safe Systems approach. For example, Bellevue has developed a collision dashboard that allows for interactive searching of fatal and serious injury collisions on Bellevue streets over a 10-year period. For information about progress on other efforts, visit the Progress Reporting page. 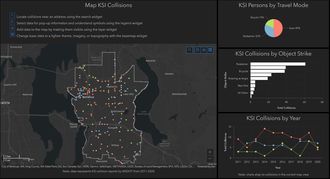 Alerts
Receive email or text when this page is updated
Subscribe