Construction began in June 2021. The project was delayed due to the concrete truck driver strike, and is now expected to be completed in late 2022 or early 2023. Heavy construction involving concrete trucks and large equipment is planned to be done by late summer/early fall 2022.

What to expect during construction 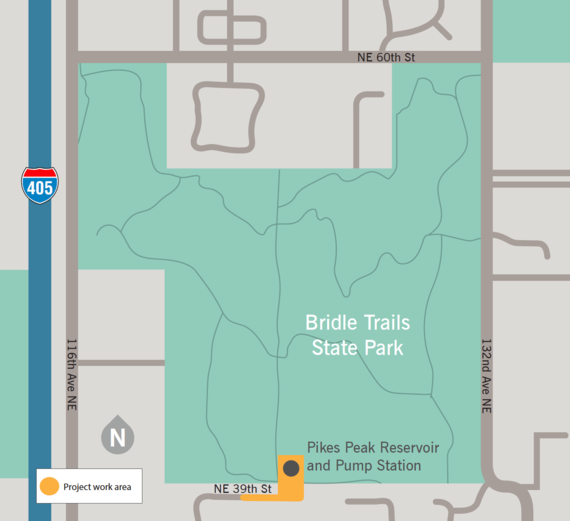 Through a lease agreement with Washington State Parks, Bellevue Utilities has owned, operated and maintained the Pikes Peak Reservoir and Pump Station facilities in Bridle Trails State Park. Utilities has been planning to replace the reservoir and relocate the pump station. This is a high-priority project because these valuable water system assets provide water service reliability and fire protection to the residents of the Bridle Trails and Cherry Crest neighborhoods.

During the preliminary design phase, it was determined that the preferred alternative was to replace the existing Pikes Peak reservoir and relocate and incorporate the Pikes Peak pump station operation to facilities in Cherry Crest. The aging Cherry Crest Pump Station facility, located next to the Cherry Crest Mini Park along 127th Avenue NE, was recently reconstructed. The new facility serves the Cherry Crest, Bridle Trails and Pikes Peak neighborhoods.

Now that the new Cherry Crest Pump Station is in operation, construction can begin on the Pikes Peak Reservoir Replacement project.

This project is part of Utilities' rehabilitation and replacement program, established to maintain the area’s water service infrastructure. The Pikes Peak Reservoir has been identified as one of the more seismically deficient reservoirs in the system and is a high priority project.

During the preliminary design phase, Utilities evaluated proposed improvements for replacement of the reservoir and pump station within the existing site located in Bridle Trails State Park. To ensure the Pikes Peak Reservoir Replacement project was a collaborative effort, the project team created and gathered public input through a Community Advisory Group (CAG) made up of key stakeholders of several community groups and interested individuals who live near and/or use the park.

The CAG met seven times from December 2016 through September 2017 to discuss community priorities and project alternatives. Utilities also hosted an open house for the general public and briefed the Bridle Trails Community Club to share information about the project. From this process, a preferred alternative was mutually selected. Communication between Utilities and the CAG continued throughout the design phase up to the present and will continue through the construction phase. 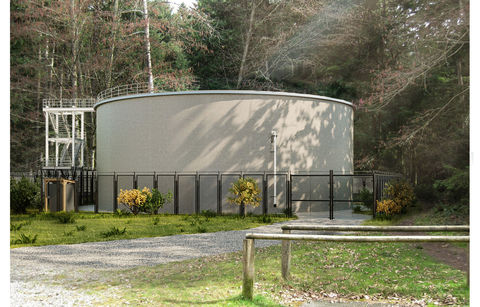 This rendering highlights the appearance of the proposed reservoir. Additional landscaping, including the restoration of plants, grass and trees, is not shown. 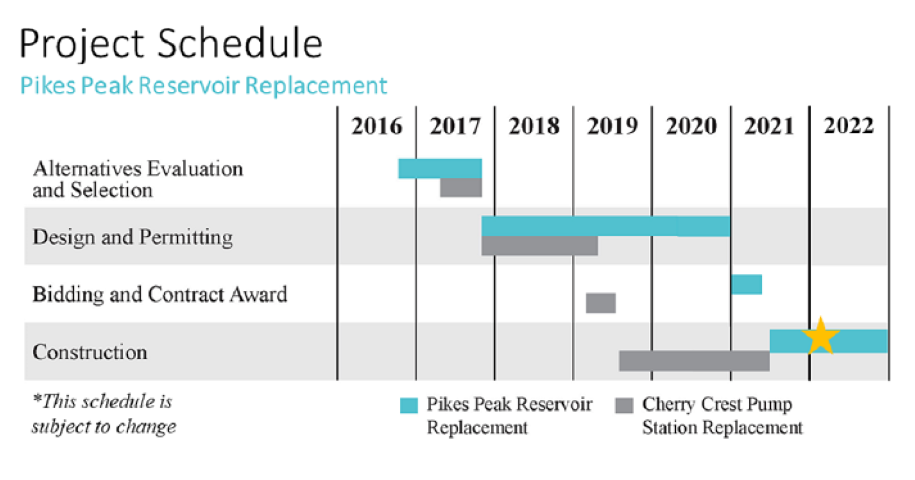