The Factoria Boulevard Stormwater Conveyance Improvements project will improve stormwater infrastructure to reduce the risks of flooding during heavy storms in the Factoria-Richards Creek drainage basin.

The city will replace a segment of stormwater pipe with a larger one along the northbound lanes of Factoria Boulevard Southeast, next to the Factoria Village commercial area. The city will also install a concrete box to hold stormwater, which will drain into a modified Richards Creek Inlet channel.

The project is jointly funded by the City and the King County Flood Control District (KCFCD).

Why is this construction needed?

Flooding is a recurrent event in the Factoria-Richards Creek drainage basin during major storms. In August 2014, a heavy storm inundated Factoria Boulevard with nearly four feet of water. Businesses were flooded, streets were impassible and the community was significantly disrupted.

These kinds of storms have increased in frequency in the last decade and may continue to increase as a result of climate change. If the city does not expand and improve the capacity of the existing storm drainage system, more flooding events on Factoria Boulevard may occur, causing significant disruption to traffic flow in the region and economic impacts to the many businesses in this area.

The city is committed to improving the stormwater system to make sure another large flooding event does not disrupt the area again.

Where is the project located? 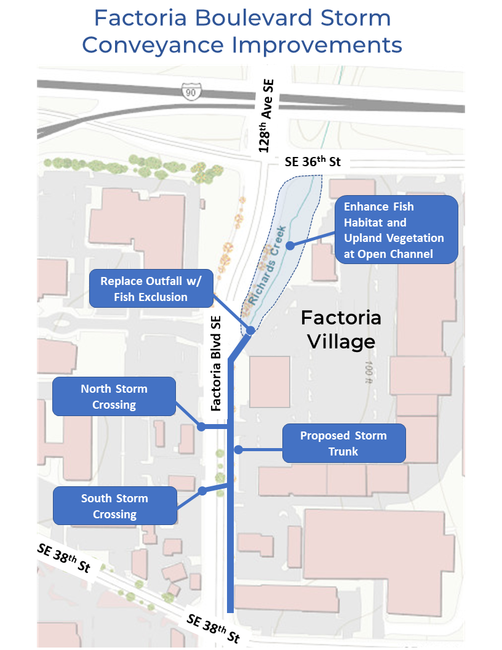 What to expect during construction?

The city recognizes that project construction will affect those who live, work, and travel through the area. We are working to minimize disruption to the extent possible, including the measures outlined below:

Business access: Access to the businesses on both sides of Factoria Boulevard will be maintained throughout project construction. The city will provide clear signage to highlight business access locations.

Bus routes: The two King County Metro bus stops in the project area will be temporarily relocated. The City will coordinate with King County Metro to minimize impacts to transit service and determine the new temporary bus stop locations.

As the project nears construction, the city will share more detailed information about these impact areas to support businesses and residents and to help commuters plan travel routes.

The city is working to engage with residents, businesses and commuters who may be impacted by this project on multiple channels, including this project website, mailed notices, one-on-one meetings and online open houses.

In addition to sharing the project purpose, benefits and potential construction impacts, we want to understand and support the needs of the community to the extent possible. 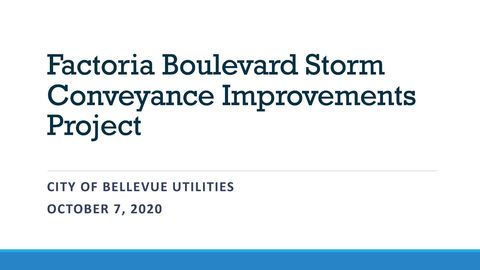 To meet with city staff regarding this project, please contact:

Help in other languages

Residents who speak the following languages may call a toll-free number for more information about this project.