This project will enhance mobility and safety for people walking, biking, driving and taking transit on 120th Avenue Northeast, between the future Northeast 16th Street and Northup Way. It would be a continuation of previous corridor upgrades -- between Northeast Fourth and 16th streets -- completed in three phases from 2013 to 2018. Like the earlier work, this fourth phase would support growth and redevelopment in the Bel-Red and Wilburton areas. The improvements are being planned in coordination with Sound Transit’s East Link light rail project. 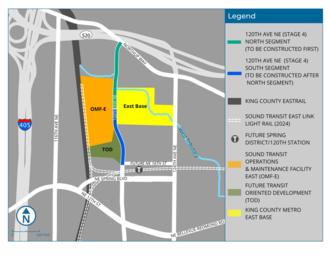 Design work is happening through a Three Party Agreement approved in 2015. An evaluation is being coordinated with a planned Transit-Oriented Development near Sound Transit’s Operations and Maintenance Facility-East, located on the west side of 120th Avenue Northeast. Design elements (image of proposed design) that will be considered in the feasibility study include:

Design for this fourth phase is anticipated to be complete in early 2023. The 120th Avenue Northeast (Stage 4) / Northeast 16th Street to Northup Way – Multimodal Corridor Completion project would be constructed in two segments:

The city proposes first constructing the north segment improvements due to uncertainties with proposed development within the south segment project limits.

Funding for construction has not yet been secured.

An online open house was held March 29-April 16, 2021, as an opportunity for public feedback on preliminary design concepts for roadway sections, a trail crossing and urban design features. A summary report was published in May 2021. General themes gathered from the online survey include:

Engineering design (to 60% level of completion) and coordination of work are funded by the City’s Capital Investment Program and estimated at approximately $3 million. The remaining design work will be funded with $1.46 million from the Puget Sound Regional Council Surface Transportation Program. Construction is currently unfunded. Approved 2021-2027 Capital Investment Program Budget Sheet. 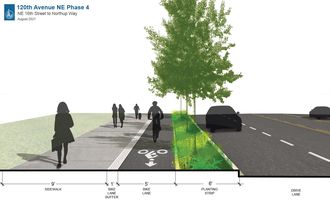