The city’s Neighborhood Traffic Safety Service program is working to improve safety in the Eastgate neighborhood near Tyee Middle School. Beginning in 2019, the work has been done in phases that include building a new roundabout and a new sidewalk. The latest effort will lower the speed limit on streets near the school.

In response to community concerns about high vehicle speeds and traffic safety around Tyee Middle School in the Eastgate neighborhood, the Transportation Department lowered the speed limit from 25 mph to 20 mph on most public streets near the school in July 2022. The affected roads are between SE 36th Street and SE Newport Way, west of 150th Ave SE (map). This speed limit reduction is the next phase in a wider set of improvements that included a new sidewalk and mini roundabout. Existing speed limit signs will be changed to reflect the new speed limits and additional signs will be added at key locations. 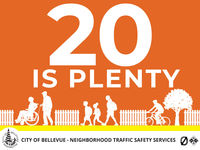 Yard signs that indicate “20 is Plenty” are available to community members, by request, by contacting John Murphy and providing your address. These signs help reinforce the new speed limit. If requested, staff will coordinate with you to arrange a drop-off to your home.

Following the implementation of the speed limit reduction, a follow-up traffic study will be conducted and results will be compared to the earlier study. A community survey also will be conducted; a postcard with a link to the survey will be mailed to households following installation.

The city is interested in reviewing speed limits on local streets as part of its Vision Zero program. Vision Zero is the city’s commitment to eliminate traffic fatalities and serious injuries on city streets by 2030. In the city’s 2021 Vision Zero Action Plan, there is an action to “Develop a neighborhood slow zone program to reduce speed limits citywide to 20 mph.” The speed limit reduction project near Tyee Middle School is the third 20 mph zone in Bellevue and is supporting the larger effort to review the appropriateness of 20 mph speed limits on additional local streets in Bellevue.

Do other neighborhoods have posted 20 mph speed limits?

Two other neighborhoods in Bellevue have 20 mph speed limits: Surrey Downs and along the East Bellevue Demonstration Greenaway. Both projects showed reductions in speeding following the implementation of the lower speed limit.

Why didn’t the speed limit change on Allen Road or 146th Ave SE?

A segment of 146th Ave. SE, between SE Allen Road and SE 36th Street, and on Allen Road, will remain signed at 25 mph as it is a transit route and carries higher vehicle volumes than many of the other streets in Eastgate.

I don’t live within the area that is getting the lower speed limit but would like to see a 20 mph speed limit in my neighborhood. Can that happen?

Currently, no. The city is interested in reviewing speed limits on local streets citywide as part of its Vision Zero effort to eliminate traffic fatalities and serious injuries on city streets by 2030. One of the actions in the city’s 2022 Vision Zero Action Plan is to “Continue expanding neighborhood slow zone program while advancing citywide efforts to implement a local street speed limit reduction policy reducing speed limits on local streets to 20 mph.” The speed limit reduction project near Tyee Middle School supports that effort.

How will speed limit signs change in the neighborhood? 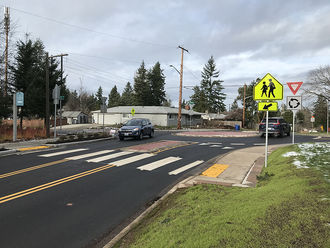 Neighborhood Traffic Safety Services developed a traffic improvement project for the Eastgate neighborhood around Tyee Middle School to make it safer for people to walk and to reduce the speed drivers. Construction began in June 2019 and was largely completed in early 2020. Project elements included a mini-roundabout at 138th Avenue SE and SE 40th Street and a new sidewalk on the west side of 138th Avenue from SE 40th Street to SE Allen Road.

This project responded to concerns about speeding and traffic volumes and the need for safe walking and bicycling in the neighborhood, including to and from school. City staff met with stakeholders to identify needs such as improved crosswalks, additional pavement markings and other features to calm traffic.