The first project of its kind in Bellevue, the East Bellevue Demonstration Greenway is intended to make it easier for people to bicycle and walk around the neighborhood to reach nearby destinations. The two-mile long greenway (map) was installed in late August and early September, 2021, along 166th and 165th avenues, from Southeast 14th Street to Northup Way. The “demonstration” aspect of the project means the city used quick-build, low-cost treatments, and that residents are encouraged to provide feedback before, during and after installation.

Thanks to the more than 300 people who responded to a questionnaire that was live from September 2021 to Jan. 4, 2022.  Once analyzed, the results of the questionnaire will be shared on this webpage.

The greenway project (map) treatments are intended to make it safer and more comfortable to bicycle and roll on the corridor. Improvements will include:

The demonstration period will last approximately six months, until early 2022.

Depending on project results and feedback from residents, more permanent treatments – including speed bumps, concrete traffic circles and traffic diverters – may be added later as a separate project. 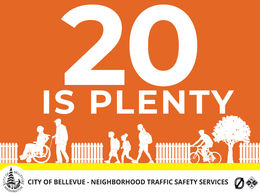 To raise awareness of traffic safety in neighborhoods, the city offers colorful neighborhood yard signs with traffic safety messages for people using the streets. To obtain one of the yards signs to place near your home or along the Greenway, please request one. Additionally, as part of this project, the speed limit along the Greenway was reduced to 20 mph. To reinforce the new speed limit, the city offers “20 is Plenty” yard signs. If you’d like one of these, please contact John Murphy at jmurphy@bellevuewa.gov or 425-452-6967.

Why a demonstration project?

In 2020, the city launched Bellevue Healthy Streets, in which several streets – including the 165th/166th avenue corridor – were closed to non-local motor vehicle traffic to allow better physical distancing practices during the COVID-19 crisis. The demonstration project builds on the Healthy Streets foundation. The 165th/166th avenue corridor also was identified as a bicycling route in the city’s 2009 Pedestrian and Bicycle Transportation Plan, listed as Project Idea NB-1 in the city’s 2016 Bicycle Rapid Implementation Program and noted as a potential next step in Bellevue’s Healthy Streets Evaluation Report.

Also known as “neighborhood bikeways” or “bicycle boulevards” in other cities, neighborhood greenways include treatments that make it easier and safer to bicycle on low-speed streets. They typically include signs and pavement markings to clearly identify the bike route and may also include traffic calming measures to help lower vehicle speeds and reduce vehicle volumes.

The estimated cost of $200,000 is funded by the voter-approved Neighborhood Safety, Connectivity and Congestion Levy, and by the Neighborhood Traffic Safety program.