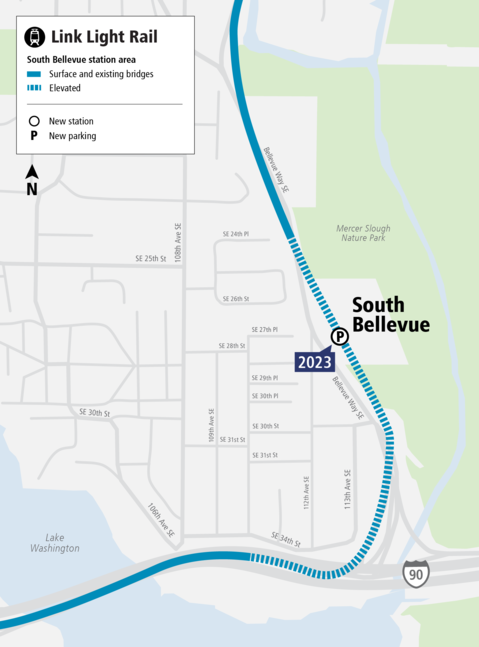 Has access into the Enatai neighborhood at SE 30th St or 112th Ave SE changed?

Yes. In spring 2021, left turns from northbound Bellevue Way SE to SE 30th Street are now prohibited to improve safety. Left turns from SE 30th onto Bellevue Way SE are also prohibited. The only access change into the Enatai neighborhood is at SE 30th St. The combination of northbound vehicles rapidly decelerating through this intersection as they depart the freeway and southbound congestion for vehicles approaching the freeway creates a condition that is challenging for drivers to navigate when turning left. Eliminating the left turn movements at this intersection will improve overall safety.

Drivers have the option to U-turn just south of 112th Avenue SE to head southbound on Bellevue Way to turn right on SE 30th Street. Alternatively, drivers are encouraged to access the Enatai neighborhood by driving a short distance up to 112th   Avenue SE (by the central entrance to the South Bellevue Station and Park-and-Ride) and turning left. Access to properties along Bellevue Way are “right in/right out” only.

Prior to the U-turn opening, an increase in traffic on 112th Avenue SE was observed as local drivers needed to find alternative ways into the neighborhood. The city is monitoring traffic following the opening of the U-turn to determine if traffic patterns have dramatically shifted.

Where will the station be located?

This elevated station will be located in front of the new South Bellevue park and ride. Colorful artwork will line the sides of this station creating a pleasant visual effect and reducing noise. See the schematic from Sound Transit below for visual reference. 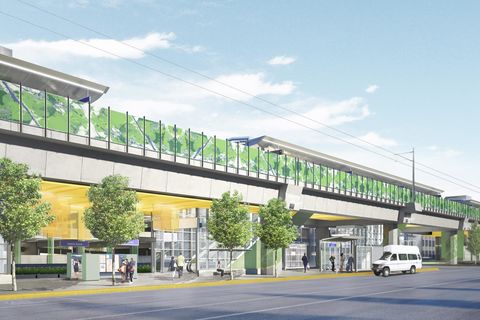 Will there be public art or open space as part of this station?

Yes, there will be several works of public art both integrated into the station and located at the new park and ride:

When will construction be complete?

Construction of the station and alignment is expected to complete by the spring 2021. Sound Transit will undergo a one-year testing period following the completion of the East Link segment. You will begin to see empty trains running along the tracks but they will not be ready for passengers until 2023.

Will there be a commuter parking lot at this station? Where to park now?

Yes. there will be a 1,500 stall park and ride built as part of the station. The only other park and ride will be located at Bel-Red/130th Station.  The commuter lots will be phased out as the opening of the garage, scheduled for early October 2021, approaches.

For present-day alternatives to the South Bellevue Park and Ride please visit this Sound Transit page for a list of alternate parking lots.

Please remember that commuters are asked not to park in Bellevue neighborhoods.

What will service from this station be like in 2023?

Trains will depart from this station every 6 minutes during peak hours. It will take approximately 13 minutes from South Bellevue Station to International District/Chinatown Station where one can continue towards the University of Washington or transfer to access Seattle-Tacoma International Airport.

Will my public transportation routes be affected?

Temporary construction closures might affect bus stops/lines. Please look out for alerts and updates from your transit agency.

What preservation is occurring for the Winters House?

The historic Winters House, built in 1929, is being monitored and preserved during East Link construction. The protective plastic wrapping around the building is temporary. Once re-opened the landscaping in front of Winters House will be restored and East Link will travel in a trench under the Winters House driveway. The building is expected to reopen prior to 2023 when East Link passenger service begins

Why is the large magnolia tree by Winters House being relocated?

Light rail construction work is occurring close to the existing tree and its root system. To minimize potential damage to the tree, the Heritage Magnolia tree will be relocated approximately 50 feet west of it’s current location within the Winters House parcel in late January 2020. A new magnolia tree will be planted in its place.  A specialty tree relocation contractor will perform the relocation with oversight by the City.

What construction is happening adjacent to Bellevue Way SE?

The first phase of construction involved the relocation of public and private utilities on Bellevue Way SE. From June through November 2017, full and partial weekend closures of Bellevue Way and the I-90 ramps were necessary to complete the work. (Phase 1 is complete.)

Phase 2
Once utility work was complete, construction of the guideway (e.g. columns) and trench began in earnest. Construction of the South Bellevue Park-and-Ride garage continues. (Phase 2 is underway spring 2018.)

For more about on traffic control on Bellevue Way

Phase 3
The third phase will be to restore Bellevue Way pavement, sidewalk, striping and landscaping. This work will wrap up in spring/summer 2021.

Will there be road and lane closures on Bellevue Way SE?

In order to work in the eastside curb lane while maintaining two lanes of traffic in the peak direction (northbound 6-10 a.m. and southbound 2-6 p.m.) crews will use the 'southbound center lane' as a reversible traffic lane. At times, northbound vehicles will travel in what is normally a southbound lane. 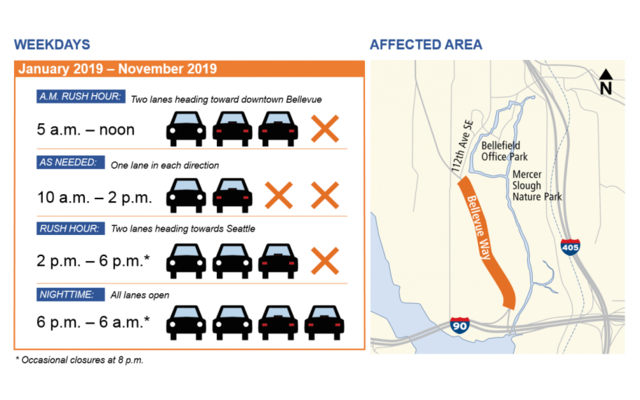 The graphic above illustrates the direction of traffic flow throughout the day. Tail lights indicate vehicles traveling northbound and headlights represent vehicles traveling southbound. During all work activity the eastside curb lane will be closed and occasional mid-day closures (10 a.m. to 2 p.m.) of a second lanes may be needed. From 8 p.m. to 6 a.m. and during most weekends, all lanes will be open to traffic.

5 a.m. to noon: The eastside curb lane will be closed at 5 a.m., but work will not begin until 7 a.m. Two lanes of northbound traffic and one lane of southbound traffic will be maintained. Drivers needing to access 112th Avenue Southeast will need to travel in the furthest right open lane.

10 a.m. to 2 p.m.: Occasional closures of two eastside lanes. One lane of traffic will be maintained in each direction. Typically when the second lane is not closed from 10 a.m. to 2 p.m., the 6 a.m. to 10 a.m. configuration maintaining two lanes of northbound and one lane of southbound traffic will continue past 12 p.m.

2 p.m. to 6 p.m.: The eastside curb lane will be closed. One lane of northbound traffic and two lanes of southbound traffic will be maintained. Occasional closures through 8 p.m., with work until 8 p.m. more likely between June and September.

112th Avenue Southeast: Monday-Friday 9 a.m. to 4 p.m. As needed, daily lane closures of 112th Avenue Southeast, between Main Street and Southeast 8th Street. Two-way traffic will be maintained at all times. People walking, biking and driving should follow the direction of flaggers to safely reach their destination.

24-hour closure: The sidewalk on Bellevue Way Southeast between the Wye at 112th Avenue Southeast and the South Bellevue Station site is closed. This closure will continue for approximately 2 ½ years; people biking and walking should seek alternate routes

For more about on traffic control on Bellevue Way:

Yes. Both the Washington State Department of Transportation (WSDOT) and the Bellevue Transportation Department have reviewed the anticipated closures. Sound Transit and the Contractor will coordinate closely with WSDOT and the City prior to traffic changes that affect I-90 motorists. 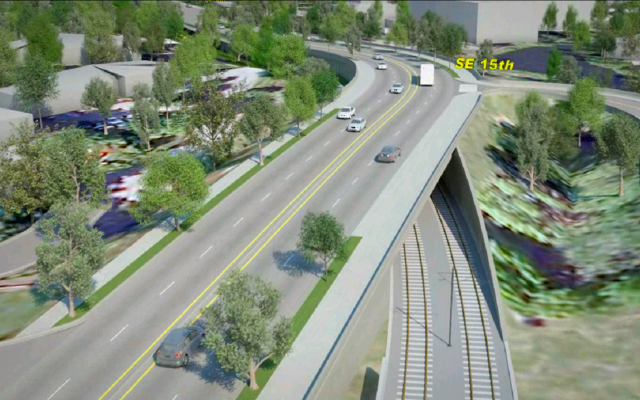 In November 2019, traffic was switched to the new road-over-rail segment of 112th Ave SE (as depicted in the rendering above). The road-over rail segment allows the light rail trackway to cross from the east to the west side of 112th Ave SE. Currently, there is one lane of traffic in each direction on the road-over-rail section. When it is complete, there will be two lanes of traffic in each direction.

Work continues to realign SE 15th Street north of its current location and add a traffic signal at the new intersection.

Will there be road and lane closures on 112th Avenue SE?

Yes. Starting in summer 2018, traffic control on 112th Ave SE will be implemented to allow for the construction of the temporary bypass road, road-over-rail segment, guideway and realignment of SE 15th Street. (See above FAQ).

During this phase of construction, at least one lane of traffic in each direction - north into downtown Bellevue and south to Bellevue Way SE - will be maintained.

For more about on traffic control on 112th Ave SE

What is the Bellevue Way Southeast Southbound HOV Lane project?

The City is exploring alternatives to widen Bellevue Way Southeast by approximately 20 feet on the west side of the roadway in order to add a new southbound high-occupancy vehicle (HOV) lane to increase capacity for traffic leaving downtown and to improve transit reliability and speed. The City is developing the alternatives by taking into consideration comments heard from individual briefings and open houses with the public.

The project team has been refining design options based on community feedback and working with the Bellevue Transportation Commission and City Council to consider a preferred design option and provide direction on next steps.

In May 2018 the City Council directed staff to defer additional design work on the project until 2021-2022, with construction to follow as funding becomes available in the capital budget. Progress on the project's design reached the 30 percent level of completion and that work would still be applicable once the project resumes.

What measures are in place to reduce the impacts of light rail construction and operation in Bellevue?

As it relates to the East Link light rail project, mitigation is known as measures that are intended to lessen the impact of construction and operation of the trains.

Mitigation is a high priority for the city and Sound Transit and was addressed in the planning, design and construction of the light rail occurring in Bellevue.

View the Mitigation Map (Jan. 2018) that shows temporary mitigation during construction and permanent mitigation once the trains are operational.

What hours is construction noise allowed? Are expanded hours allowed?

Construction noise is allowed between 7 a.m. and 6 p.m., Monday through Friday and 9 a.m. to 6 p.m. on Saturday. Construction noise is prohibited beyond these hours, on Sunday, and on certain holidays, unless otherwise allowed by a city-approved permit. The Noise Code does contain exemption provisions.

How can I receive East Link construction updates?

The following are ways to receive East Link construction updates:

How do I report a concern? Ask a question?

If you have a concern or question about light rail construction, please contact: