The Mountains to Sound Greenway is a 100-mile long corridor along Interstate 90, stretching from the Seattle waterfront to Ellensburg in Central Washington. It features hiking and biking trails and a regional trail network used by pedestrians and bicyclists for recreation and transportation. The 3.6-mile trail project in Bellevue will close a gap in the Mountains to Sound Greenway Trail between Factoria Boulevard and Lakemont Boulevard.

Construction on the first phase of trail improvements in Bellevue began in September 2019 to build a 12-foot pedestrian/bicycle path, a pedestrian/bicycle bridge over Factoria Blvd, a tunnel under the existing I-405/eastbound I-90 ramps, relocate portions of the trail and install additional lanes on the I-90 eastbound off-ramp to Factoria Boulevard. Details in construction alert (August 2019). Construction is expected to be complete by the end of 2020. 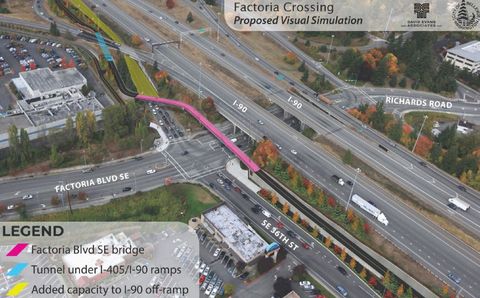 In 2013, the city began the final design on the Greenway Trail between Factoria Boulevard Southeast and 150th Avenue Southeast. The design follows recommendations made in the Mountains to Sound Greenway Trail Design Study. The alignment was chosen as part of a study of the entire Eastgate/I-90 corridor. Sections of the trail in Bellevue include:

Several ideas were considered as part of the Eastgate/I-90 Land Use and Transportation Project on how to address the “Eastgate Gap.” Community input and feedback indicated that bicyclists preferred the southern alignment because it is the most direct and continuous route. A citizen advisory committee endorsed the pathway depicted in the proposed Mountains to Sound Greenway alignment. The city, in partnership with the Mountains to Sound Greenway Trust, completed a design study of trail alignment along the south side of Interstate 90.

Alerts
Receive email notification when this page is updated
Subscribe