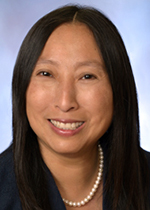 Janice Zahn joined the City Council in November 2017, after being elected earlier that month to fill the previously vacated Position 5 seat. Janice, who is engineering director at the Port of Seattle, strives to make the city more strategic, regional and communicative. She has lived in Bellevue since 1994.

Janice’s priorities include managing Bellevue’s rapid growth to address “the increasing tension between livability and economic vitality,” ensuring more streets serve a variety of users and finding ways to make housing more affordable for all who want to live in Bellevue.

Noting Bellevue’s diversity, Janice wants to ensure that the city continues its work to be more inclusive and celebrate the richness of its culture.

Janice served on the city’s Transportation Commission from 2013 to 2017. She has also been a Girl Scout leader and participated with the PTSA. In 1997 and 1998, she participated in the city’s Advance Bellevue community leadership program. She volunteers with The Sophia Way, an Eastside nonprofit that provides shelter for homeless women.

An immigrant from Hong Kong, Janice lives in the Greenwich Crest neighborhood with her husband Dwain and daughters, Megan and Leah. She is an active member of the Aldersgate United Methodist Church.

Past Assignments and Appointments