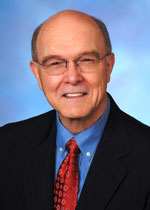 During his time on the council, John has advocated for affordable housing and livability in Bellevue and multimodal transportation, as well as construction of an Eastside performing arts center.

Prior to joining the council, John was a member of the Parks and Community Services Board for three years. He also served on the Eastgate/I-90 Citizen Advisory Committee and the Bellevue Parks Yes! Levy Steering Committee.

In addition, John cofounded Eastside Pathways, a collective-impact nonprofit working to ensure that all children have the support they need to maximize their opportunities for productive, fulfilling lives.

John moved to Bellevue in 1991 from Dallas, Texas. A retired attorney, he holds a law degree from George Washington University and a bachelor's degree in political science from Texas Tech University.

John has a grown daughter. He is an avid reader and model railroader. He also enjoys gardening and an eclectic variety of music.