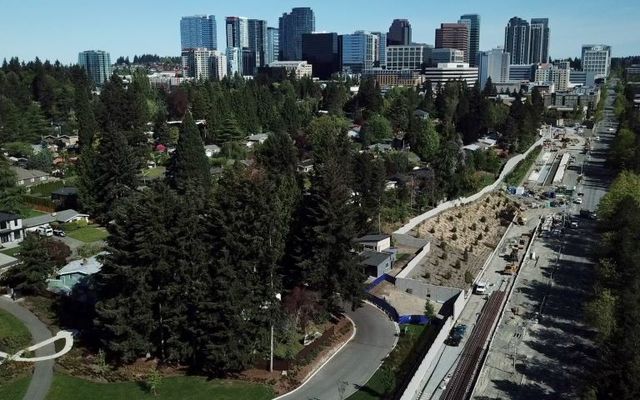 On Monday, Sound Transit representatives updated the City Council on the construction of its Operations and Maintenance Facility – East (OMF-E) and East Link light rail extension. The OMF-E, located on 120th Avenue Northeast in BelRed, is where 96 light rail vehicles (LRV) will be stored, maintenance on the LRVs will occur and staff will be based. Occupancy of the facility is expected in the fall.

During the briefing it was reported that the East Link extension—14 miles of light rail extending from the International District in Seattle to the Redmond Technology Center station in Redmond—is now more than 75 percent complete. Construction is currently on schedule despite impacts to operations due to COVID-19. Current status and photographs of the 10 stations was presented including the construction status of the six stations in Bellevue and the downtown tunnel. An update on outreach efforts and resolutions to common concerns was also included in the update.

Councilmembers expressed appreciation of the collaboration between Bellevue and Sound Transit, the efforts of outreach staff and learning that major traffic impacts will significantly be reduced by the end of this year. Service is scheduled to begin in 2023.

The public had an opportunity to comment on the proposed Land Use Code Amendment (LUCA) during the virtual hearing. Following public testimony, councilmembers discussed the draft LUCA and the importance of adopting the LUCA before FEMA’s August 19 deadline so the city can remain in the National Flood Insurance Program (NFIP). Continued participation in the NFIP allows residents and businesses to retain their NFIP-backed flood insurance.

The council later directed staff to prepare the final ordinance for adoption at the July 27 session as an item on the consent calendar. The public hearing replay is on Bellevue Television.

Finally, councilmembers received a report on the city’s popular Neighborhood Enhancement Program, a $5 million program that distributes funds to two neighborhood areas each year for local improvements. Residents of the areas submit ideas for small to moderate improvement projects that fit within their area’s allotted budget and vote on their favorite ideas to be implemented.

So far, the program has implemented improvements in eight areas, received more than 1,100 submissions for project ideas, processed roughly 4,000 voting ballots and completed or are currently implementing 24 small to moderate capital projects.

Some examples of the creative ideas that neighborhoods came up with for improvements include a lighting/art installation in Lattawood Park in the Eastgate neighborhood, a bridge and trail improvements at Ardmore Park in Northeast Bellevue and bat houses in the Lake Hills Greenbelt.

The program will be in the West Bellevue and Woodridge neighborhood areas in 2021. The city website contains the full schedule and area budgets, as well as a program overview.