In an effort to reduce congestion on highways and local streets, the state supports programs that lower the number of cars, particularly those with one occupant, on the roads during peak travel periods. 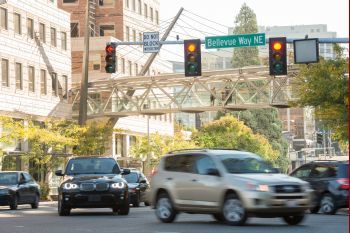 The City of Bellevue is required by the state to maintain a Commute Trip Reduction plan, which is focused on employers citywide with 100 or more full-time employees. The most recent 2015-2019 update to the plan was adopted in September 2015 and has been extended by the state to 2023. By state and city law (listed under Bellevue City Code 14.40), certain employers with 100 or more employees must provide Commute Trip Reduction programs. Choose Your Way Bellevue offers details to help employers draft CTR programs, and provides information about travel options in Bellevue.

As of December 2019, there were 58 affected worksites in Bellevue with 40,755 workers, approximately 28 percent of all workers in the city. From 1993 to 2018, Bellevue’s CTR-affected employers lowered the rate of people commuting by driving alone from approximately 76 percent to 61 percent. Downtown CTR employers reduced their drive-alone rate from 68 percent to 51 percent, and employers outside downtown reduced their rate from 81 percent to 74 percent. (Downtown performance is measured from 1995, the first cycle with reliable data for the downtown area.)

Citywide, these reductions correspond to nearly 3,100 vehicles removed from the daily commute, a line of cars roughly 8.3 miles long. 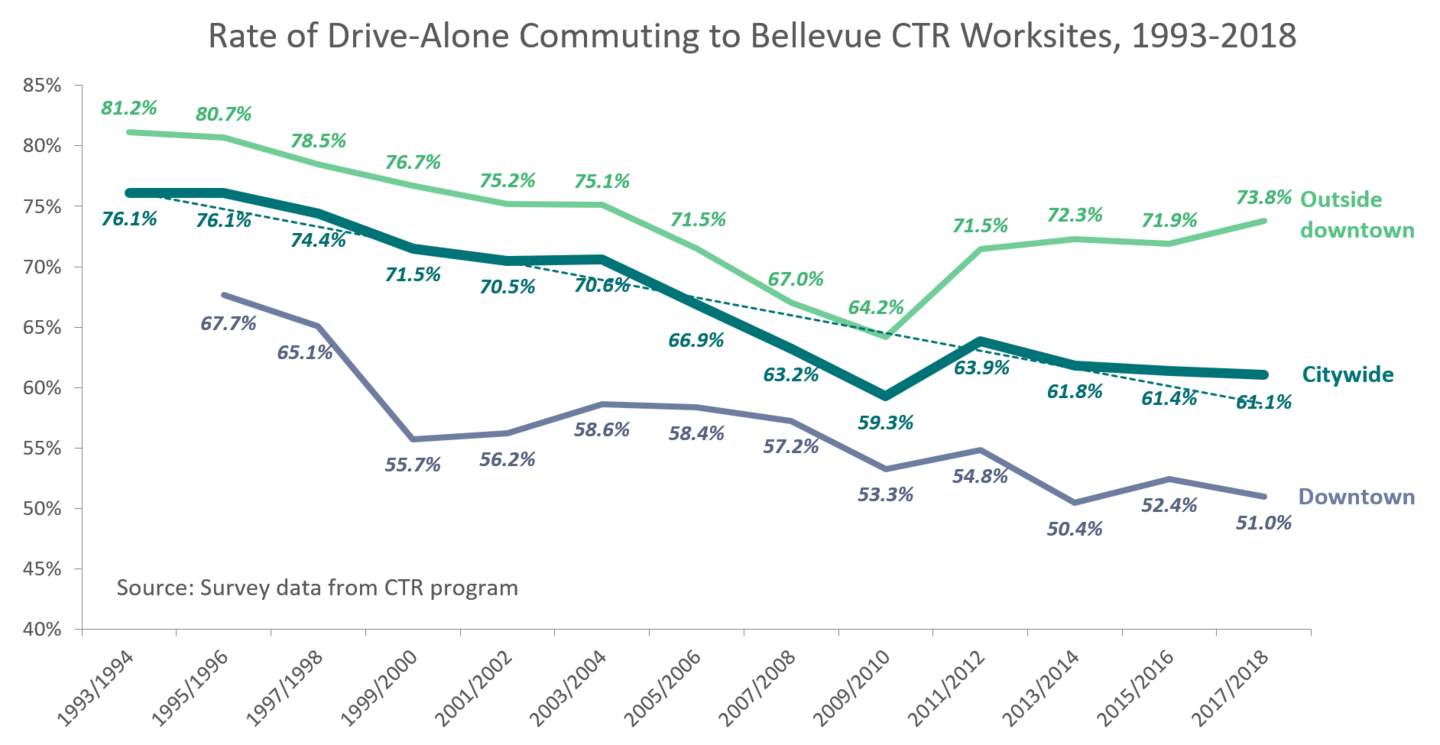 What is Commute Trip Reduction (CTR)?

Washington's CTR Law (RCW 70.94.527), adopted by the legislature in 1991 and revised in 2006, is incorporated into the Washington Clean Air Act. Its purpose is to improve air quality, reduce traffic congestion and minimize energy consumption by encouraging people to utilize ways to get to work other than driving alone.

The law requires affected employers in the most congested areas of the state to promote commute alternatives such as transit, carpool, vanpool, bicycling, walking, working from home, compressed work weeks and flexible work schedules. It also requires jurisdictions to work toward trip reduction targets and coordinate with regional governments.

Why should people care about CTR?

Wherever congestion occurs, the delay in employee productivity and freight delivery translates to lost money. Washington's economic vitality depends on personal mobility and the efficient movement of goods and materials. Reducing the proportion of single-occupant vehicles and number of vehicle miles traveled increases the efficiency of our roadway space.

In a 2017-18 CTR survey, commuters at worksites statewide who participated in commute trip reduction left about 34,500 cars at home every weekday, opting instead to commute by bus, vanpool, train, bicycle, foot or to telework. These alternative commute trips reduced almost 13 percent of daily vehicle miles traveled per employee between 2007 & 2018.

Which employers are affected by the state's CTR law?

The CTR law affects both public and private employers that have 100 or more full-time (35 hours or more per week) employees who: work at a single worksite located in one of the state’s most congested corridors; and who begin work between 6 and 9 a.m. on two or more weekdays for at least 12 continuous months. More information can be found in RCW 70.94.527

The law applies in certain urban growth areas of the state with a state highway segment exceeding one hundred person hours of delay. Most jurisdictions in King County, including Bellevue, are required to implement the CTR law. Affected jurisdictions are required to pass a local CTR ordinance with specific requirements for that jurisdiction. Bellevue’s city-specific CTR requirements are in Chapter 14.40 of the Bellevue City Code.

What are the goals for CTR-affected employers?

Every two years affected employers use a state-supplied survey to ask employees how they get to work, how many miles they travel to work and other questions about their commute habits.

The survey results are used to measure the employers’ progress against assigned baseline values (the baseline year is 2008 or the year they became affected, whichever is later) for non-drive-alone rate and vehicle miles traveled (VMT).

What are employers required to do under the CTR law?

An affected employer must make a good-faith effort to develop and implement a CTR program. This means, at minimum, doing the following:

How can employers encourage the use of commute alternatives to driving alone?

Under the CTR law, an employer must implement a program to reduce commute trips to the worksite. However, employee transportation coordinators are only limited by their imagination. Popular program elements include:

What if an employer doesn't comply with CTR requirements or meet its CTR goal?

The CTR goals are just that, goals. If the employer is making a good-faith effort to implement its CTR program, it cannot be penalized for failure to meet the CTR goals. Employers that don't make progress will be asked by their city or county to revise their programs to make them more effective.

Cities and counties are there to work with employers to create successful programs, not to penalize employers who don't succeed. However, civil penalties may be assessed for failing to meet the minimum requirements described above or making a good faith effort to comply with the requirements of the law.

What other states have a CTR-type law?