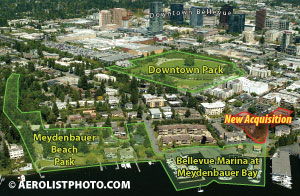 residents and provide a pedestrian corridor from the shoreline to downtown.

At a news conference Tuesday, City Council members said a 1 ½-acre parcel of property at the bay they decided to acquire this week represents the crown jewel in the city's decades-old effort to acquire various properties on the bay and create the park and corridor.

"The sustained vision of an entire community is responsible for this remarkable achievement," Bellevue Mayor Grant Degginger said. "Great cooperation and great vision have created a legacy for our city that will be cherished and enjoyed for generations to come."

With the latest acquisition, the city now owns more than nine acres on the bay, and 1,250 linear feet of Lake Washington shoreline.

Since the 1990s, the city has slowly acquired property on the bay with the hope of one day establishing a community park to reestablish the city's historic roots to the waterfront and significantly expand resident access.

The vast majority of Bellevue's waterfront is privately owned, and the latest property acquisition was viewed as critical for the creation of a park that would provide access as well as a pedestrian corridor connecting the Lake Washington shoreline to the cityâ€™s downtown, including Downtown Park.

The 17-acre Downtown Park, which hosts some of the city's most popular summertime activities drawing thousands of people, is a block away from the latest property purchase.

A 51-unit apartment building, the Bayvue Village Apartments, now occupies the site the city will purchase. City officials stressed tenants will be allowed to continue to rent the units while the city continues planning the new park. That process could take a couple of years.

A citizens committee presently is working with the city to devise a general blueprint for the park. Work on a master plan for the new community park is expected to be done sometime next year.

Council members noted that the most of the money for the property acquisition -- $8.5 million -- will come from a one-time windfall the city received in real estate excise taxes. The taxes were generated from the recent sale of several large office buildings downtown.

During its most recent budget deliberations, Council specifically targeted the windfall for the acquisition of property at Meydenbauer Bay should any become available.