Landslides occur when masses of earth, rock or debris move down a slope. Landslides can happen without warning, moving at avalanche speeds. Earthquakes, significant rainfall and human modifications of land are some of the most common causes of landslides.

Bellevue is hilly and experiences significant amounts of rainfall, which makes it susceptible to landslides. To help prevent landslides, Bellevue's land-use code limits construction and/or clearing of vegetation in critical areas, which include geological hazard areas. Avoid building on steep slopes, hill edges, drainage routes and areas where there is a lot of erosion.

In 2014, the deadliest landslide in the United States took place in the town of Oso in Snohomish County. An unstable hillside gave way, sending millions of cubic feet of mud across a square mile in seconds, killing 43 people and burying 49 structures.

While the Oso slide was extremely fast, you sometimes can see signs of a landslide forming, including: 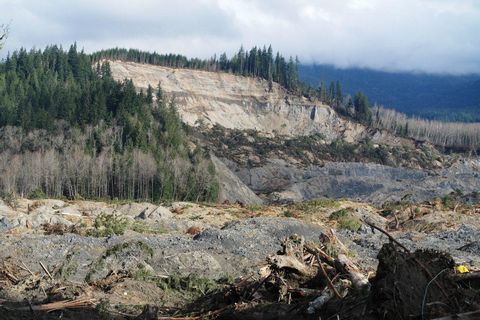 Run away from the hillside.