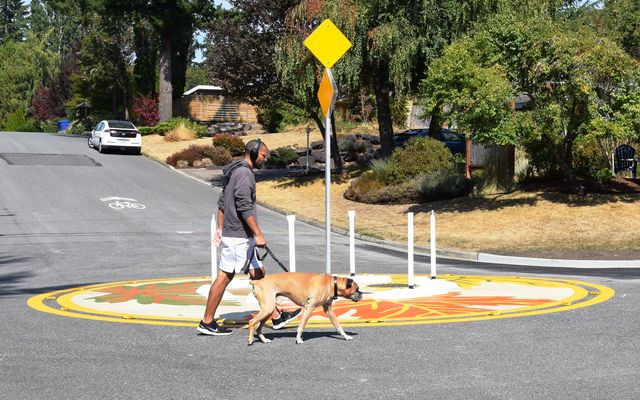 The city’s first neighborhood greenway has opened on 165th and 166th avenues in East Bellevue, and we want to know what you think of the project, which aims to create a safer, more comfortable corridor for people to walk and bicycle through the neighborhood.

Please respond to a short questionnaire at EngagingBellevue.com/east-bellevue-greenway. Feedback will help determine whether to keep or refine project features, and will provide insights for use in planning future greenways. The questionnaire, available in seven languages, takes 5-10 minutes to complete and will be live through January 2022.

The two-mile long greenway runs from Southeast 14th Street to Northup Way. The “demonstration” aspect means quick-build, low-cost treatments have been temporarily installed and soliciting community feedback is an important part of the project. Features of the East Bellevue Demonstration Greenway include:

Also known as “neighborhood bikeways” or “bicycle boulevards” in other cities, Bellevue’s greenway project builds on last year’s Healthy Streets pilot, where some streets, including the 165th/166th avenue corridor, were closed to non-local vehicle traffic to allow better physical distancing in response to the pandemic. The 165th/166th avenue greenway route has been identified in the city’s long-range transportation plans for more than a decade.