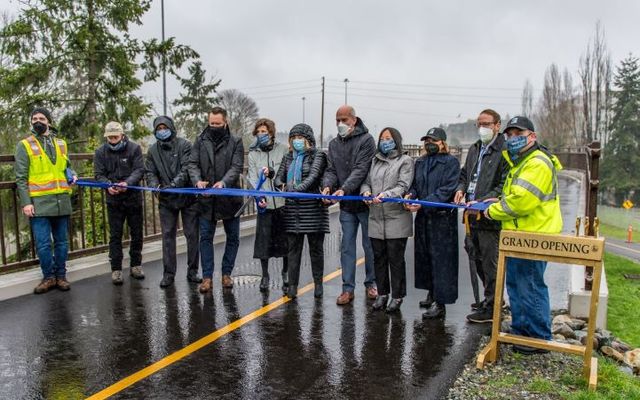 City, state and federal leaders today marked the completion of the latest Mountains to Sound Greenway segment in Bellevue.

The new pedestrian and bicycle extension, which parallels Interstate 90, makes it safer and more convenient for people to walk, ride and roll through Bellevue’s busy Factoria neighborhood.

“This is a major improvement for Bellevue’s pedestrian and bicycle network, and it will also be a tremendous benefit for regional users,” said Mayor Lynne Robinson. “Thanks to the public and to our federal, state and regional partners for making this project a reality. Special thanks to the state Department of Transportation and to the state Legislature for their generous support. It would not have been possible without them.”

The latest segment completed extends the trail from 132nd Avenue Southeast to 142nd Place Southeast; a previous segment, from I-405 to 132nd Avenue Southeast, was completed in early 2021. Together, the 1.2-mile city construction project, valued at $27 million, fills a significant portion of the overall 3.6-mile trail gap that runs east-west through Bellevue.

Early work on filling the “Eastgate Gap” in Bellevue began when the Greenway Trust obtained a National Scenic Byways grant in 2011. Additional funding came from Bellevue and the Puget Sound Regional Council, with construction funds from the State Legislature.

Design and construction funding to complete the trail within Bellevue, from 142nd Place Southeast to Lakemont Boulevard and into Issaquah, has not yet been secured.