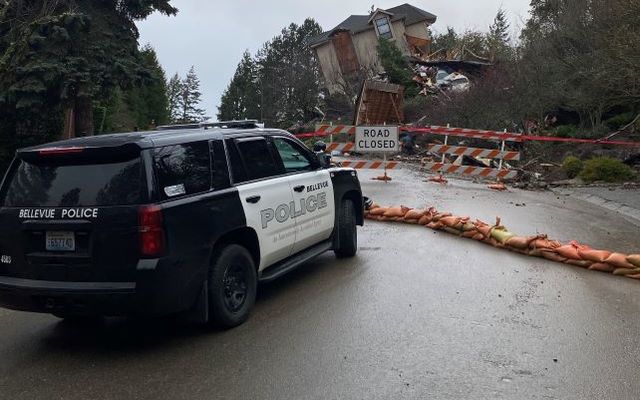 Demolition of structure needed to allow residents to safely return

The City of Bellevue has arranged 24-hour security around the slide site in the Somerset neighborhood. Bellevue police officers have been patrolling the area but will now provide security round-the-clock until residents are allowed back in their homes.

“Security in this zone is a top concern for us,” stated Interim Police Chief Wendell Shirley. “While our officers have been patrolling the slide zone on every shift, we are pleased the city has authorized us to provide off-duty officers as another line of security.”

Early Thursday morning, a resident in the affected area reported that a man broke in the back door of one of the red-tagged homes and fled when the homeowner confronted him. Police received the call around 8:30 a.m., but the suspect had already left the scene. Officers are continuing to investigate.

“This is a terrible incident and just adds to the stress of the situation for the affected homeowners,” said City Manager Brad Miyake. “As we work through this complex situation, getting neighbors back to their homes safely remains a top priority.”

On Wednesday, city staff and first responders safely escorted residents to their homes to give them an opportunity to remove essential possessions, including vehicles. Seven homes in the area remained “red-tagged” due to safety concerns around the collapsed home. Because the home is on private property, timing for removal is still unclear. City officials are in direct contact with the homeowner’s insurance company and allowing residents of the six other homes to return as soon as possible is a top priority.

Bellevue Utilities has confirmed that an eight-inch water main was the source of the rushing water in the area but were not yet sure what led to the break in the pipe or the cause of the landslide. An investigation is ongoing.

Impacted owners and neighbors can contact Mark Heilman in Neighborhood Services if they have questions at 425-452-2735 or mheilman@bellevuewa.gov.