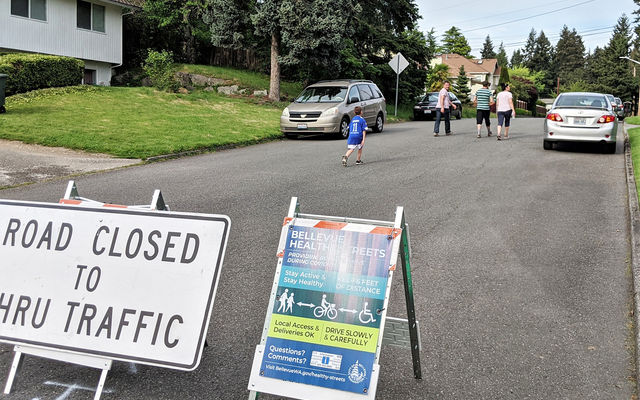 Bellevue’s Healthy Streets program is winding down due to equipment and maintenance needs as the weather changes. After a five-month run, residential streets in three locations temporarily reserved for people walking and bicycling are scheduled to reopen to non-local vehicle traffic on Friday, Oct. 2.

People should still drive slowly and cautiously along these residential streets, as they will continue to be used by residents on foot and bicycle, particularly where sidewalks and bike lanes are not available. People walking and bicycling should return to normal use of the street and sidewalks where available.

Similar to programs in other cities nationwide, Healthy Streets provided people more room to move while physical distancing during the COVID-19 crisis by using simple, low-cost signs to close residential streets to non-local traffic. The $20,000 cost covered signs, barricades, public outreach materials and video observation used for data collection. The city has applied for federal funds available to cover the cost of protective measures related to the COVID-19 pandemic.

The first Healthy Streets opened in early May in the Northeast Bellevue and Lake Hills neighborhoods. In early June, the 165th/166th Avenue location in Northeast Bellevue was extended, and two new locations were opened in the neighborhoods of Northwest Bellevue, near Downtown Park, and Newport Hills. The Healthy Street in Newport Hills was removed in early August in response to community feedback.

The remaining Healthy Streets will revert to normal usage because the barricades and “road closed” signs temporarily allocated for Healthy Streets must be returned to use for streets closed due to flooding, ice or snow.

Bellevue’s Healthy Streets was a pilot, and the Transportation Department is considering follow-up projects in 2021.

Transportation staff evaluated the performance of the pilot, including feedback received from residents. More than 140 people responded to an online questionnaire, 50 people provided comments via emails and phone calls, and nearly 70 posts were submitted on social media channels. Key takeaways include:

Staff will engage with residents to help decide where and how to implement Healthy Streets or projects like it next year. In the meantime, residents can email healthystreets@bellevuewa.gov to comment on the pilot or suggest next steps.