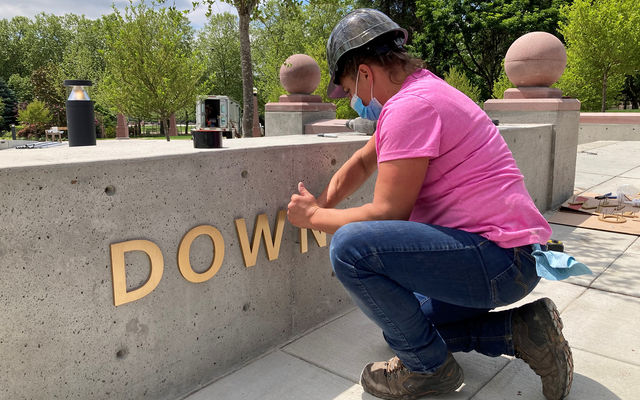 Downtown Park features a new Northeast Gateway, a pedestrian entrance with a plaza, water feature and seating areas that strengthens the connection between the park and Bellevue’s commercial district.

After a year of construction, the fencing around the site will be removed today (Friday). A formal celebration of the gateway will be in the fall, after public art by THEVERYMANY has been added to the plaza in the late summer.

The park’s northeast corner, at the busy intersection of Northeast Fourth Street and Bellevue Way, is highly visible, with an estimated weekday average of 26,000 people traveling daily down Bellevue Way.

“This project creates a distinct and much needed connection between the park and downtown’s commercial district,” said Mayor Lynne Robinson.

“Since ground was first broken for the park in the ‘80s, it has been every bit the well-loved landmark city leaders envisioned,” said Michael Shiosaki, Parks & Community Services director. “Each major improvement since then has made it more accessible and beautiful.”

A portion of the arch from Union S High School, which stood on the site of Downtown Park from 1923 to 1989, has been installed in the formal garden.

Bellevue bought most of what is now Downtown Park from the school district in 1983. An international design competition the following year yielded the park master plan. Three phases of construction on the park were completed by 2017, but the elaborate northeast entrance concept in the plan was unfinished until now.

With the public art, the new entrance will be part of the Grand Connection – a pedestrian-focused, interactive corridor through the heart of Bellevue. MacLeod Reckord Landscape Architects designed the gateway entry.

Ohno Touchdown JV is the contractor.