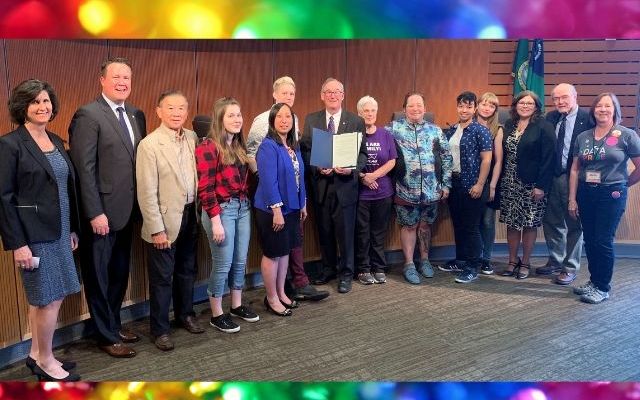 Monday night’s study session featured a special look at Bellevue’s partnership with the University of Washington in the Livable City Year program. Councilmembers, along with residents and students, got a chance to see all of the findings at a celebration in the City Hall concourse.

Two hundred and eight five students from multiple UW schools, colleges and campuses gave staff new planning and policy ideas for 30 projects. Additional details on the work can be found in an earlier news release.

Later during the regular session, the council awarded three separate contracts worth more than $3.25 million for improvements to the transportation system. All of them are partially funded by the 2016 Neighborhood Safety, Connectivity and Congestion Levy, and construction on all three is expected to begin this summer.

More information on each project is available on the consent calendar in the council agenda.

Councilmembers also took a few minutes to recognize June as Lesbian, Gay, Bisexual, Transgender and Queer/Questioning (LGBTQ) Pride Month. As part of the celebration, a rainbow flag will be flown at City Hall and other city facilities throughout the month. City staff will also participate in the 45th annual Seattle Pride Parade on June 30.

The full proclamation can be found in the agenda packet materials.