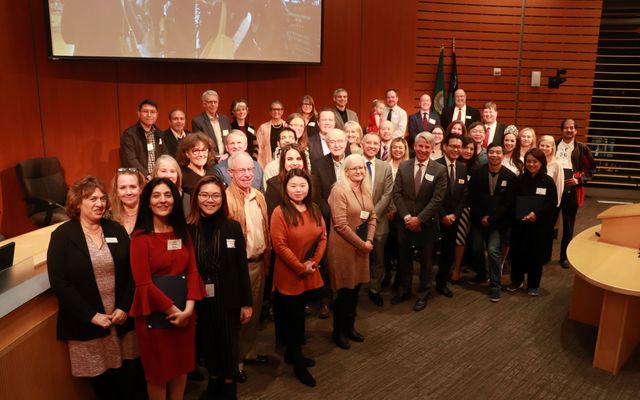 In Monday’s City Council session, the public had an opportunity to comment on recommendations for an amendment to the city’s Land Use Code (LUC 20.30U) governing temporary encampments hosted by religious organizations on their property. The goal of the code amendment is to operate encampments under one standard in alignment with both the city’s land use code and a prior-issued Consent Decree.

Following public testimony, the council further discussed some of the four key topic areas included in the draft code. Another city council study session on Nov. 25 will provide an opportunity to further discuss potential amendments in these topic areas before expected final action in December. The proposed regulations are not related to unlawful public camping which is prohibited in city parks and right-of-way areas.

You can view a video replay of the full discussion through Bellevue Television and find more information on the city’s temporary encampments web page.

During the earlier study session, the council received a fourth update on changes to the city’s budget as part of the mid-biennium budget review. Among the topics in this week’s budget discussion was a proposal for additional staff for the Bellevue Police Department.

Bellevue Police reported the results of a third-party department review that evaluated the current workload in all divisions and anticipated future staffing needs.

The final report recommended the addition of nine positions in areas including Investigations, Property & Evidence, and Personnel Services. Citing critical needs in Investigations and Property & Evidence and the recent success of being fully staffed in patrol, police leadership proposed adding two full-time positions to the budget. The department will continue to use the report findings to assess and plan for future staffing needs.

The council also reviewed a proposed update to the Transportation Impact Fee Rate Schedule. Transportation impact fees are charged to developers to help pay for capacity improvements to the city’s transportation system. The upgrades are needed to keep pace with the additional vehicle trips generated by new development.

Recent updates to fee rate calculation factors, including increased project costs, resulted in considering changes to the city’s impact fee rate schedule. Transportation staff conducted outreach with the business and development community to explain the proposed changes, which would result in either higher or lower rates, depending on the type of development.

The proposed new rates, which would take effect on Jan. 1, 2020, are intended to be “revenue neutral,” meaning the higher charges would only keep the city’s capital budget in balance. The city’s impact fee rate schedule was last updated in 2015.

These items are the final proposed adjustments to the budget as part of this year’s mid-biennium budget changes. More information on the items presented this week are available as part of the study session agenda item. This week’s discussion is available on streaming video via BTV.

Next week, a public hearing on the budget items will take place. The final mid-biennium budget proposal will come before the city council on Dec. 2 for adoption.

The seventh annual installation of Bellevue Essentials, the city’s development program for emerging community leaders, concluded this week. The program was highlighted for councilmembers in a presentation that featured some of the participants who graduated this week. The full class is pictured above.

Bellevue Essentials consists of 30 hours of class time, exposing participants to the structure and inner workings of city government. Members of this year’s graduating class shared their appreciation for the program, noting that it “lifted the hood to the city to let me see a bit of the quality that is not obvious” and “equipped me with knowledge to better serve my community.”

This year’s group included 37 people from 15 of Bellevue’s 16 neighborhood areas. Participants ranged in age from 16 to 67 with half the class younger than age 50 and 51% of the class consisting of people of color.

The program is also a guidepost for other communities considering similar municipal education programs. Bellevue’s best practices have been shared with communities including Shoreline, Renton, Kent and Tacoma. You can learn more about the program on the city’s Bellevue Essentials information page.