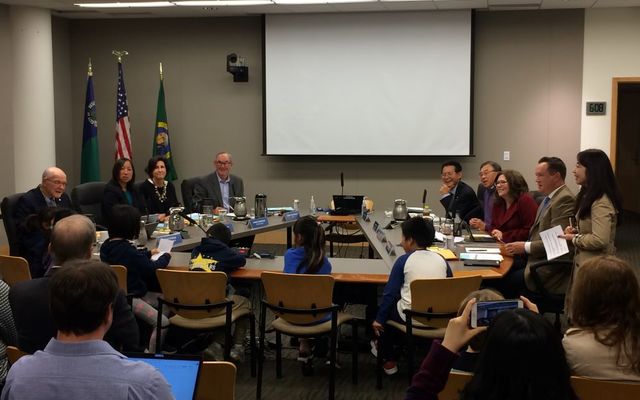 At Monday’s extended study session, the City Council received an update from the state Department of Transportation on the Interstate 405 Master Plan. A variety of critical projects in the plan, adopted in 2002, have been completed. Legislation this year allows for additional improvements.

Senate Bill 5825 was adopted earlier this year, giving approval to widen I-405 from Renton to Bellevue and include express toll lanes. Construction is expected to begin this fall. Several other interchange projects along the corridor were also discussed. When completed, the mainline and interchange improvements are expected to cut commute times significantly from Renton to Lynnwood. Over the next five years, WSDOT anticipates 40 miles of the I-405 corridor will undergo construction projects.

Councilmembers also received further information on a proposed restructure of homelessness service providers under a Unified Regional Homelessness Authority. The proposal authorizes King County to create a new public development authority that unifies providers and governance throughout the system. The stated goal is to alleviate fragmentation and increase efficiency.

During the discussion, councilmembers expressed interest and support for the goal of improving regional homelessness service delivery but noted significant concerns. This included suburban cities not having a policy-making role or active participation in strategy development for the proposed overhaul.

The full discussion can be viewed on video demand, courtesy of BTV. The council will continue to engage in feedback sessions as the proposal is refined.

Later, the council was given a second briefing on the Land Use Code Chapter 20.30U update governing temporary encampments hosted by religious organizations on their property. The amended LUC would take effect after January, when a consent decree that currently modifies the provisions in Chapter 20.30U LUC expires.

Councilmembers reviewed some of the code amendment recommendations, which more closely align with the standards set forth in the consent decree. The amendment aims to consolidate temporary encampment management under one set of regulations, while meeting the needs of hosts and the surrounding neighborhoods.

Public hearings and further council study session(s) on the code amendment will occur through the fall. Additional information can be found in the agenda packet materials.

At the top of the meeting, the council enjoyed a visit from some very young residents to celebrate the physical and environmental benefits of walking to school. Children and parents from Bennett, Cherry Crest and Somerset Elementary Schools joined the mayor to proclaim Oct. 2, 2019, as “International Walk to School Day.”

Fourteen area schools are holding walk to school events that day. Drivers are urged to use caution around school zones and in neighborhoods near schools. The full proclamation is posted online.

NOTE: Due to Sept. 30 being the fifth Monday of the month, there will be no council meeting. Councilmembers will return to session on Oct. 7.