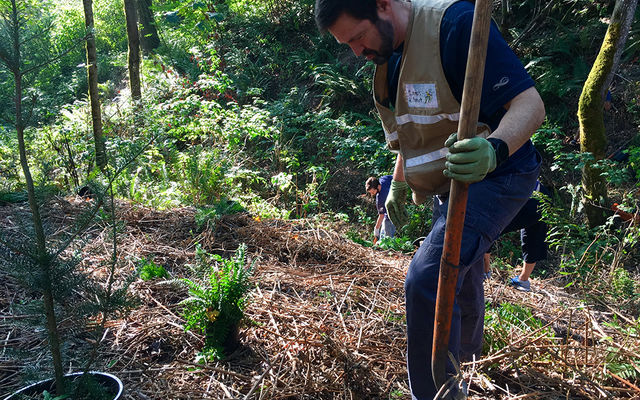 On Monday, the City Council received an update on recent progress made as part of the city’s Environmental Stewardship Plan and voted to sign an updated joint climate commitment with regional partners.

The King County-Cities Climate Collaboration (K4C) is a voluntary collaboration of King County, 16 cities and the Port of Seattle to coordinate and enhance the effectiveness of local government climate and sustainability action. Bellevue signed the K4C Joint Commitments letter in 2015. Updates to the commitments were recently made to reflect new relevant state laws, updated science, greenhouse gas emissions, and the current elected officials and K4C member agencies. The council unanimously approved signing the updated K4C Joint Commitments letter.

Councilmembers were also briefed on recent progress made to advance the Environmental Stewardship Initiative (ESI) Plan Update based on direction from the council last November and community input. Updates included aspiring to more aggressive targets in some areas and adding shorter term targets to more effectively track incremental progress.

Council will receive a briefing on the final draft plan in November, with final adoption expected by the end of the year. More information on the city’s ESI progress can be found in the meeting agenda item and at the city’s ESI Plan Update web page.

Later, the council received a briefing on the administrative budget and work program for A Regional Coalition for Housing (ARCH) and were asked to direct staff to prepare legislation for the 2021 budget to be approved at a later meeting. ARCH, a partnership of 15 Eastside cities, assists Bellevue staff in implementing actions in the city’s Affordable Housing Strategy.

ARCH’s 2021 proposed Administrative Budget of $1,155,261 represents a 4.1 percent ($45,164) increase over the 2020 budget. ARCH committed to holding member dues at the same level as 2020 given current economic challenges for many in the community. ARCH’s planned expenses in the 2021 budget were limited to the minimum necessary to preserve current operations and staffing, and new administrative fees were established to cover inflation costs and help replenish operating reserves.

Bellevue’s share of the ARCH 2021 Administrative Budget is included in the city’s operating budget that the city council will review later this fall and is not expected to increase from the 2020 level of $281,876. It represents 24.4 percent of ARCH’s total administrative budget. The full discussion can be viewed through video replay on Bellevue Television.

The council also read a proclamation celebrating Eastside Welcoming Week Sept. 18-27 in Bellevue and other Eastside cities, with events taking place through the remainder of Sept. and Oct. The community is invited to engage in opportunities during Welcoming Week and beyond to learn, connect across differences and take joint action to achieve a welcoming, equitable and inclusive community.

The late former U.S. Sen. and Wash. Attorney General Slade Gorton was honored at the meeting with a commendation. Sen. Gorton was 92 when he passed away in August. He spent more than 40 years in public service and was a resident of Bellevue.