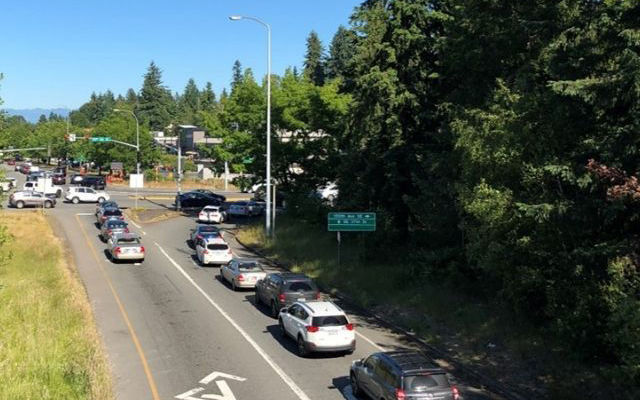 The study, proposed in 2016 and funded by the Neighborhood Safety, Connectivity and Congestion Levy, provides a detailed traffic analysis of the Eastgate area along Interstate 90, from Factoria Boulevard to 150th Avenue Southeast. Large employers in the heavily-traveled area include Bellevue College and T-Mobile.

Recommended projects in the study are intended to reduce the growth of vehicle congestion, while providing amenities for people walking, bicycling or taking transit. The study used modeling to analyze key intersections and corridors, comparing existing conditions with a 2035 forecast under two scenarios – one with the recommended improvements and one without.

Recommendations range from expensive to low-cost, such as adding lanes at intersections, signal timing adjustments and restriping pavement. Currently, there is no funding for the major projects recommended in the study. However, the council directed staff to build a project on Southeast 38th Street at the westbound approach to Factoria Boulevard, which would be funded from the levy (approximately $175,000).

Looking ahead, the next step is to incorporate the study’s recommended projects into the city’s comprehensive plan and revise descriptions of existing projects. More information, including a copy of the study, is available with the council’s agenda material.

The city conducts the survey annually to track how residents perceive city services and to modify those services as necessary. Every other year Bellevue conducts a budget survey to learn about resident budget priorities.

To collect the survey data, Northwest Research Group randomly contacted a representative sample of residents with questions online and by telephone (landline and mobile) from Feb. 22 to March 24.

The council was pleased to learn his year’s results are generally up from those in 2018, with key measures improving or remaining steady. Nearly three out of four respondents (73 percent) said the city is headed in the right direction, citing Bellevue’s continued growth, planning and infrastructure, public transportation and schools. Those critical of the city’s direction also cited growth, as well as traffic and the cost of living, expenses and taxes.

Additional information about the performance survey is in the agenda packet.

To conclude the meeting, the council voted 6-0 (Councilmember Jared Nieuwenhuis, excused absence) in support of the King County Proposition No. 1, the “Parks, Recreation, Trails and Open Spacy Levy.” If approved, the measure would provide funding for county, town, city and park district parks. It includes money for a handful of Eastside projects.

The property tax would begin in 2020 at 18.32 cents per $1,000 of assessed valuation. The measure will appear on the Aug. 6 countywide primary ballot.

Background on the proposal is available in the agenda materials. An earlier council presentation provides details about the levy.