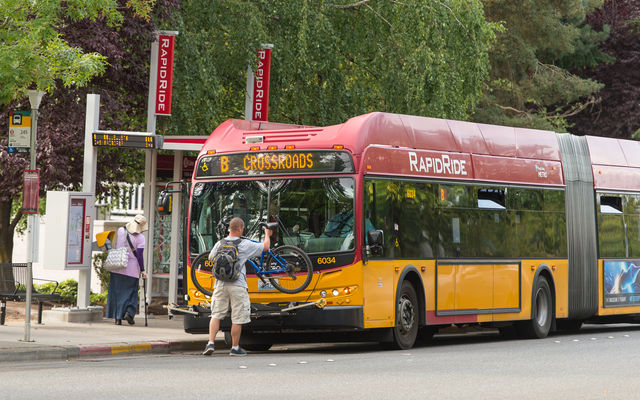 At Monday’s extended study session, the City Council was briefed on the progress made by King County Metro to plan for a new bus rapid transit line running through Bellevue, the RapidRide K Line. The K Line is expected to enter service in 2025 and would connect the Eastgate Park & Ride along Interstate 90, one of the largest hubs in the regional transit system, through downtown Bellevue and Kirkland to Totem Lake. Metro is currently working with local partners in advance of route implementation to discuss route options and coordinate alignment with local planning priorities.

The K Line will be the second RapidRide route with service through the city. The RapidRide B Line has been operating since 2011 connecting Redmond, Overlake and Bellevue. The planning process for the K Line will include integration with the new East Link Light Rail Blue Line currently under construction. King County Metro plans to add seven more bus rapid transit lines in the region by 2027 in partnership with local municipalities and other transit agencies.

You can view the presentation materials and video discussion online through Bellevue Television.

In other business, the council received an update on the results from a Road Usage Charge (RUC) pilot program that involved three driver surveys running from February 2018 until January 2019. The purpose of the program was to determine if a RUC program would be feasible and preferable to the current statewide gas tax program that currently funds highway projects. RUC programs charge drivers based on miles traveled instead of fuel usage. The RUC pilot tested a 2.4-cents per mile charge for lightweight, non-commercial vehicles; the current statewide gas tax is 49.4-cents per gallon.

The Washington State Transportation Commission reported that at the end of the pilot project, about 60 percent of participants in the study preferred the RUC over the gas tax and would approve of phasing in a RUC program over a period of several years. The study also concluded that a RUC system would generate more revenue than the current gas tax for transportation projects.

The council plans to develop an interest statement on the matter. The materials presented at this week’s meeting are attached to the study session agenda item.

Finally, the council was presented with a calendar of key dates for the upcoming mid-biennium budget review process. Through the November weekly city council sessions, the council will review the General Fund forecast and proposed budget adjustments, including updates to fire inspection and development services fees, capital and operating adjustments and other considerations.

The council will hold a public hearing on the budget items on Nov. 25. Mid-biennium budget adoption by the council is expected to take place on Dec. 2. The schedule and additional background is included in the agenda packet materials.