Members of a bowling team at the Sun Villa Lanes in Eastgate in 1980 could help police establish a connection between Michael Allan Halgren, charged in January with first-degree murder, and Susan Lowe, who was strangled in her apartment in 1980. Bellevue Police arrested Halgren in December 2012 based on a match of his DNA to that found on the crime scene.

Police have a newspaper picture of the team, called "Who Cares." Lowe, then 19, was active in a bowling league at Sun Villa, while Halgren often went to the bowling alley to watch his fiancée bowl. Though Sun Villa is now closed, police believe any one of five members of the team may have seen or heard something that could be an important detail in the case.

Halgren, a convicted rapist held indefinitely at a state facility for violent sexual predators, was charged on Jan. 9 with first-degree murder in connection with Lowe's death.

Please contact Detective Jerry Johnson (425-452-2754 or jajohnson@bellevuewa.gov) if you have any information or can identify the bowlers in this picture. 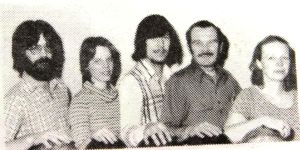