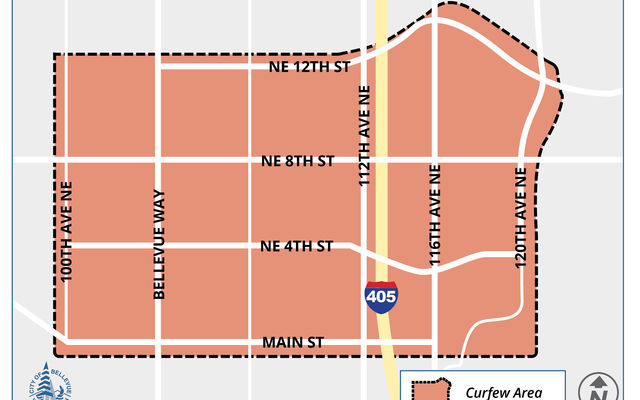 Bellevue Mayor Lynne Robinson has amended an earlier-issued civil emergency order prohibiting the possession of weapons in certain areas of Bellevue with the intent to cause harm. 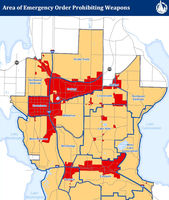 The new order expands the area where the weapons prohibition exists beyond the current curfew area to include other commercial and office-use zoned areas of the city (map). It also clarifies the weapons and activities included in the prohibition.

The order will be in place until the city’s civil emergency declaration, issued on May 31, is terminated, unless terminated sooner.

Mayor Robinson signed an emergency order issuing a curfew in Bellevue from 5 p.m. June 1 to 5 a.m. June 2 in the Bellevue downtown area in light of likely continued public disturbances.

The curfew states no person – with the exception of law enforcement and other emergency response personnel, government officials and authorized media – shall enter or remain in the public right of way, public parks or any other public place as bounded approximately on the west by 100th Avenue Northeast, on the south by Main Street/Southeast First Street, on the east by 120th Avenue Northeast/Northeast First Street and on the north by Northeast 12th Street (map).

The general curfew shall not apply to individuals traveling directly to and from work, experiencing homelessness, fleeing dangerous circumstances, or seeking necessary medical services for an individual’s self or family/household member.

The city declared a civil emergency yesterday after protests in the downtown area transitioned to vandals and looters damaging and stealing property throughout the area. The mayor also issued a civil emergency order prohibiting weapons in the curfew area.

The city is recommending businesses take reasonable precautions to close operations and protect windows and entrances. The Bellevue Police and National Guard are deployed and ready to respond to activity, with other agencies on standby to assist as able.