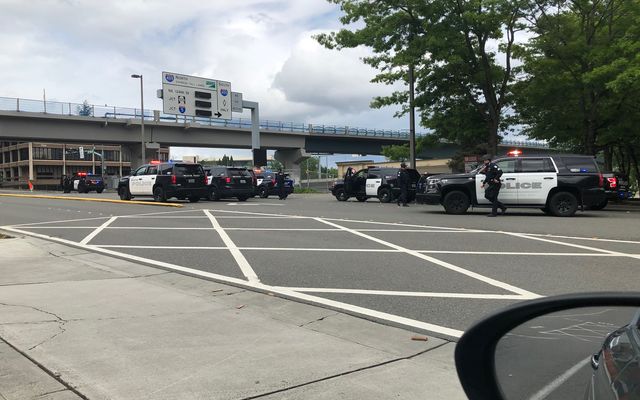 UPDATE: 10:30 p.m. 5/31/20 - Bellevue Mayor Lynne Robinson has signed a Civil Emergency Order prohibiting people from "possessing transporting, purchasing, furnishing or selling any weapon, including but not limited to: rocks, bottles, pipes, bats, clubs, chains, sharpened objects, shields, gas in the cur, flare torches, paint balls, light bulbs, any incendiary devices, pry-bars, skateboards, liquid filled balloons, lumber or any other objects which can be used to inflict bodily harm or damage to property" in the curfew area. Police are authorized to confiscate weapons and issue fines for violations of the order.

Mayor Robinson declared the emergency as a result of looters downtown damaging property and stealing merchandise. The city has also requested further law enforcement support from the county and the state. As part of the emergency declaration, the city is enacting a curfew tonight from 5:30 p.m. to 5:30 a.m. tomorrow (Monday) in the downtown area and east of Interstate 405.

The curfew states no person – with the exception of law enforcement and other emergency response personnel, government officials and authorized media – shall enter or remain in the public right of way, public parks or any other public place as bounded approximately on the west by 100th Avenue Northeast, on the south by Main Street/Southeast First Street, on the east by 120th Avenue Northeast/Northeast First Street and on the north by Northeast 12th Street (map).

The city held a news conference Sunday to discuss the situation, aired live and posted to the city's YouTube channel.