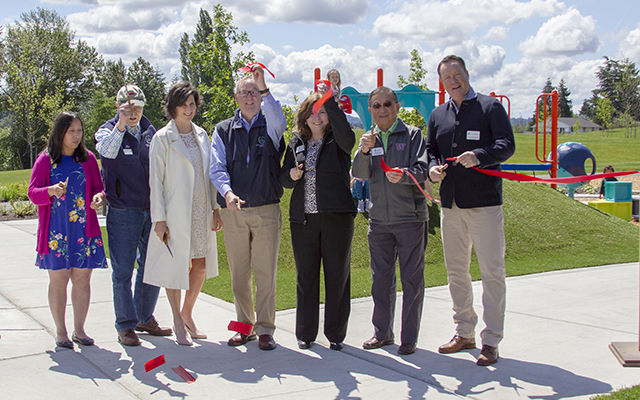 The City of Bellevue Saturday celebrated the opening of Surrey Downs Park, a 10.5-acre community amenity just south of downtown.

Over 300 people turned out for the festivities, which included a ribbon-cutting, kite-flying, bubbles, soccer and hot dogs.

“This is a spectacular neighborhood park in a highly urbanized area located next to downtown and light rail,” said Mayor John Chelminiak.

Features of the new park include a “Great Lawn” circled by a pedestrian path, a playground, basketball court, picnic shelters, restrooms and parking. Rolling hills and lookouts provide visitors with stunning views of Mount Rainier. A large meadow, (separate from the Great Lawn) provides space for kicking a ball, throwing a Frisbee or picnicking.

The property at 11177 SE Fourth St. was acquired from King County in 2005. Since then, the park has spent over 10 years in development.

A master plan for the facility was adopted in 2009, with some funding allocated from the Parks and Natural Areas Levy. Before construction began, Sound Transit in 2013 selected an alignment for East Link light rail that eliminated vehicular access to the park from 112th Avenue Southeast.

The city and community worked together another two years to update the park plan to accommodate the change and better serve the neighborhood. The City Council adopted an updated master plan in late 2015.

Construction of the park, coordinated with East Link construction, took about a year to complete, from April 2018 to April of this year. Learn more about the park, including the best way to get there, on the web page.