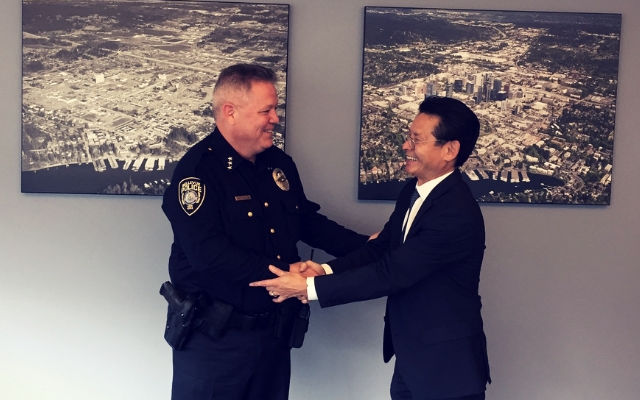 Police Chief Steve Mylett, who’s served as Bellevue’s top cop for over six years, announced Thursday that he has accepted the chief position with the City of Akron, Ohio. As part of the transition, City Manager Brad Miyake will begin a nationwide search for a replacement. Plans for an interim chief appointment will be announced in the coming days.

“While I’m personally happy for him, I was also disappointed to learn that Police Chief Steve Mylett will be leaving the City of Bellevue,” said Miyake. “Steve has done an outstanding job leading the department over the last six years during an unexpectedly turbulent and transformative time. His dedication to public service, community outreach, staffing recruitment and crime reduction efforts have enhanced Bellevue’s reputation as a safe and thriving community. I wish him and his family the best as he transitions to a new city.”

Chief Mylett joined the city in 2015 after two nationwide searches. During his time with Bellevue, he has initiated a major organizational restructuring, emphasized community outreach programs and reintroduced the bike patrol. In 2020, he supported and fully cooperated with a major third-party review of the department’s use of force policies. Mylett previously served as police chief for Southlake, Texas, after 23 years with the Corpus Christi Police.

“It has truly been a privilege to serve the Bellevue community and to work alongside the dedicated and courageous men and women of the Bellevue Police Department,” said Mylett. “It has been my greatest honor to serve as chief of police under the leadership of City Manager Brad Miyake. I am truly conflicted about leaving, but I know I leave the department in good hands and I am proud of the work we have accomplished during my tenure.”

The Bellevue Police Department serves a population of more than 145,000 in a 33-square mile area, with over 186 commissioned officers, along with 48 non-commissioned personnel. In 2021, the department was reaccredited by the Commission for the Accreditation of Law Enforcement Agencies; one of the few in the country.

Mylett will start his new role on Aug. 9. For additional information, please contact the City of Akron at Press@akronohio.gov or 330-375-2754.