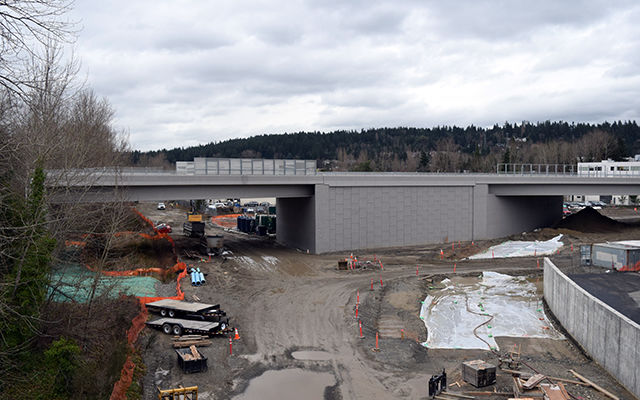 City contractors have completed the first segment of Northeast Spring Boulevard, a new east-west street that will run through BelRed. The BelRed neighborhood is an area that’s slated for rapid commercial and residential growth in the coming years.

The new, elevated segment runs from the Eastside Rail Corridor (the former BNSF railroad tracks) to 120th Avenue Northeast. For the next year or so, the roadway will be closed to traffic until a short connecting segment is completed. During this time, Sound Transit will use the roadway as the agency builds its East Link light rail line that’s adjacent to Spring Boulevard.

The construction cost for the elevated BelRed segment is $16.4 million. By finishing the first segment of Spring Boulevard now, rather than waiting until after Sound Transit completes its East Link work, it’s estimated the city will save several million dollars in construction costs.

Though short, the new segment includes two overpasses. Eventually, East Link trains will carry passengers beneath one of the spans. Passing beneath the other overpass is a light rail spur line connecting to an operations and maintenance yard that Sound Transit is building nearby.

The overall Spring Boulevard project is divided into five construction zones stretching about 1.4 miles, from Northeast 12th Street east to a 136th Place Northeast, then north to Northup Way. When complete, the new street will include two travel lanes in each direction, a center turn lane, bike lanes and landscaping. It will run parallel to East Link and, in some places, the light rail tracks will run down the center of the roadway.