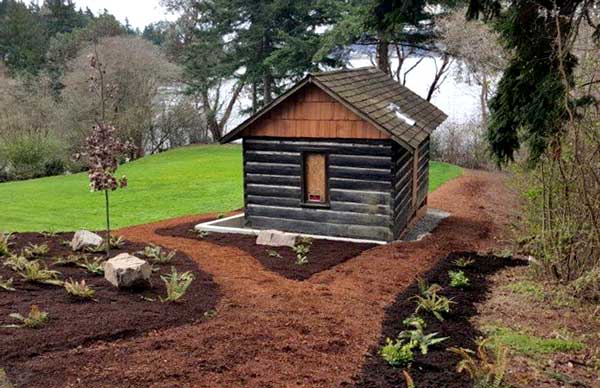 Bellevue's oldest surviving structure, the Burrows Cabin, has a new address. Built by Civil War veteran Albert Burrows in 1883, the cabin was transported in late August 2016 from its former spot off of 112th Avenue Northeast to Chism Beach Park.

In the wee hours, the humble log house rolled through downtown on a trailer, past the city's sleek, modern skyscrapers. According to the Eastside Heritage Center, this is the third relocation for the cabin, which Burrows built at the foot of Southeast 15th Street near Lake Washington.

In the 1930s, the cabin was moved to Bellevue Way, near where Bellevue Square now stands, then to its current location in 1946, where it has been occupied as a private residence. With its current site slated for redevelopment, the owners, Ty and Terry Thorpe, donated the cabin to the city and contributed $10,000 to assist in the preservation of one of Bellevue's few remaining pioneer structures.

The city decided to move the building close to its original site, at Chism Beach Park (9600 SE 11th St.), on the upper lawn near the parking lot and picnic area.

The city and the Eastside Heritage Center offer historical programs at the Fraser Cabin, built in 1888 and located at Kelsey Creek Park.

Moving the cabin required a series of steps, including the following:

At Chism Beach Park, the roof was reattached and the building placed on a new foundation.