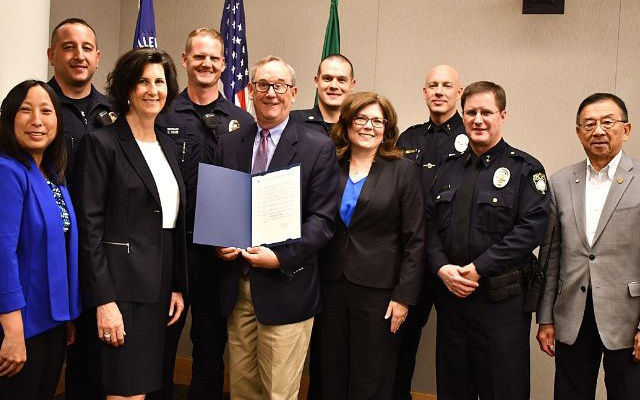 At Monday’s extended study session, the City Council was briefed on ongoing efforts and possible next steps to make downtown’s bicycle network safer and more effective. The presentation focused on two downtown areas:

Launched in July 2018, the demonstration project added bike lanes on 108th Avenue Northeast, from Main Street to Northeast 12th Street, creating the city’s first continuous route for people riding to the north and south of downtown.

An assessment of the project showed that impacts of the bikeway were positive:

The council also heard about several proposed improvements to the bikeway. These included adding bicycle signals, enhanced signage and pavement markings, and reducing traffic conflicts caused by vehicle pick-ups and drop-offs along the corridor.

The demonstration project was funded by the 2016 Neighborhood Safety, Connectivity and Congestion Levy, and the proposed improvements also would be levy funded.

In related business, the council directed the Transportation Commission to evaluate extending the bike lanes on Main Street to create a better east-west bike route.

The city will begin work on a cultural needs assessment this summer to identify arts and cultural opportunities and services the community values. At the end of the process, the council will provide direction on priorities to guide the strategic visioning process.

More details are provided in the agenda packet materials.

Earlier, councilmembers recognized National Police Week (May 12-18), as a time to pay tribute to local, state and federal officers who have died or been injured in the line of duty. The proclamation also encourages Bellevue residents and businesses to show appreciation for the city’s 184 police officers.