Bellevue residents and community organizations are eligible to receive free trees to plant in their yards. Applications will open soon and will be due on August 16th. Check out our tree offerings, information on how to apply, and guidance on how to select the right tree for the right place.

Bellevue is proud to be a "City in a park," with 2,800 acres of parks and open space. The forests in our parks help keep our waters healthy and provide homes for wildlife. It's the trees in our neighborhoods, though, that make this city truly special. Two-thirds of all trees in Bellevue are on residential land.

In Bellevue, trees are an important part of what makes our us a “city in a park.” To keep enjoying the benefits of trees and keep our city green as we grow, we encourage preserving mature trees and planting more new trees. To help us in that mission, we need more information about where trees should be planted in our community and where our most historic trees are located.

We know that Bellevue's community members are experts in their own neighborhoods, so the city is collecting your input on:

We Love Our Trees Yard Signs

Show your support for Bellevue's urban forest with a free We Love Our Trees yard sign. Take the lead on conservation in your neighborhood. 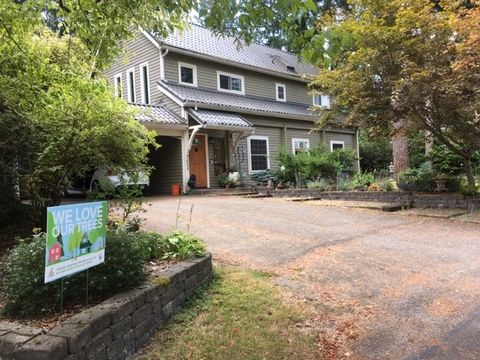 These signs are available for pickup at City Hall by emailing trees@bellevuewa.gov with the subject line "yard sign pickup."

Trees provide a multitude of environmental benefits, but are also help to enhance our health, economy, and livability of our cities.  The trees in Bellevue provide the following benefits:

Have you always wondered what a certain tree was? Maybe you saw it along the sidewalk downtown, with fan-shaped leaves that turn a brilliant yellow in October. Or maybe it was along a trail, with deep green boughs and soft red bark.

Now you can find out using our Bellevue Tree Guide! Every trip to a park is better when you know what you're looking at.

The City of Bellevue is committed to stewarding the 2,500 acres of forest, playfields, and community gardens that make up our park system, along with the 8,000 acres of tree canopy in the city.

A 2017 assessment found that 37% of the City is covered by tree canopy. In the updated Comprehensive Plan, the City set a target of 40% tree canopy cover, as recommended by leading national experts American Forests. By achieving this goal, we can expand on the health and economic benefits that trees provide.

To get involved with tree preservation in Bellevue, check out the many volunteer opportunities in our parks, or plant a tree on your own property using the Tree Care resources found in the tabs above.

Taking Stock of Our Tree Canopy

We have been measuring our tree canopy using aerial imaging roughly every 10 years since 1986. Up-to-date data on tree canopy cover and impervious surfaces allow the city to make informed decisions about stormwater management, land use and the benefits trees provide.

A 2017 tree canopy assessment provides key insights in Bellevue’s forests. While there has been a decline in tree cover since the first assessment in 1986, the decline has leveled off since 2008. Two-thirds of all the park land in Bellevue is forested, but a majority (65 percent) of the city’s tree canopy area is in suburban residential areas. The city is working to conserve existing trees while finding opportunities to plant more throughout Bellevue.

Check out our Tree Canopy Assessment Fact Sheet for a brief summary of the results.

Bellevue's abundance of trees on our streets not only enhance the experience for people walking, biking, and driving through the city, they also provide significant environmental benefits.  Bellevue has a comprehensive inventory of its street trees on urban boulevards, which you can check out here:

Find the full tree rules on our Development Services page.

Your trees do a lot to take care of you, from keeping your air clean to reducing the risk of flooding. Do something in return to keep your neighboring trees healthy! Here is a list of resources on different aspects of tree care. If you are unsure of anything or think your tree might be a hazard, contact an ISA-Certified Arborist for a professional, trustworthy assessment.

Bellevue remains committed to maintaining its "city in a park" character. However, steady development over the last 30 years has resulted in a loss of trees. In 1986, the tree canopy was estimated at 45 percent and by the year 2007, it had declined to 36 percent.

To accommodate growth over the coming decades, Sound Transit is building a light rail line through Bellevue and Puget Sound Energy is upgrading or adding electrical transmission lines. These projects will all result in some loss of tree canopy. The city is requiring mitigation to restore that tree canopy.

To mitigate for the loss of vegetation in Mercer Slough Nature Park where the light rail guideway is being built, Sound Transit has agreed to extensive replanting. The city has worked collaboratively with Sound Transit to minimize to the greatest extent possible impacts to critical areas and their buffers as well as provide visual relief from the light rail facility. Details

Puget Sound Energy is applying for permits for this project, which includes the construction of a new substation at Richards Creek and an upgrade of approximately 18 miles of transmission line from Redmond to Renton, through Bellevue. PSE is applying for construction permits. Tree removal and mitigation will be determined as part of the permit review. Details at PSE Energize Eastside.

PSE plans to build a new electrical transmission line between the Lake Hills and Phantom Lake substations. According to PSE, the project will increase overall system reliability and allow for better use of existing facilities for customers in the Lake Hills neighborhood.

The project involves the estimated removal of 295 trees on city-owned property. PSE will plant new trees and install landscaping to restore the impacted areas along the route and mitigate for any impacts to critical areas and/or critical area buffers. The exact number of trees to be replaced is to be determined through clearing and grading and right of way use permits issued by the city.

Per conditional use permit requirements, PSE will contribute $856,740 to the city to compensate for the value of the city-owned trees to be removed. This money will be placed in a fund to help pay for landscape restoration and mitigation materials, including plants and irrigation, required for the project.

Sign up for our newsletter to get the latest updates on the Environmental Stewardship Initiative.