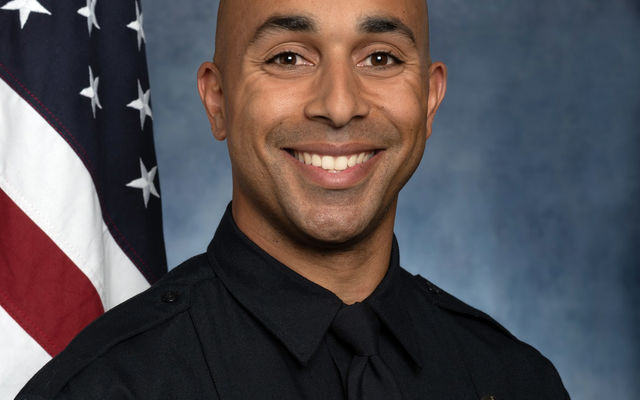 Jordan Jackson, a motorcycle officer for the Bellevue police, died Monday from injuries he sustained in a collision early that morning while on duty. Jackson, 34, joined the Bellevue department in 2018 and transferred to the traffic unit in 2020.

“We are devastated by Officer Jackson’s tragic death,” said Police Chief Wendell Shirley. “Our hearts go out to his wife, two children, his family and friends, and the extended BPD family as they grieve. This is a huge loss for the entire community.”

A memorial for Officer Jackson has been set up at City Hall (450 110th Ave. NE) on the second level outside the police lobby. The Bellevue Police Foundation is collecting funds to support the Jackson family.

Jackson was on patrol on Bellevue Way between Southeast Wolverine Way and Southeast Sixth Street Monday morning when he was struck by a car. The Washington State Patrol is investigating the crash.

Jackson, who was an EMT and volunteer on the King County Sheriff's Office search and rescue K-9 unit before he joined Bellevue, was recently honored as employee of the quarter for his excellent quality of work and service to the community. His supervisor commended Jackson for his leadership in the department and eagerness to take on additional responsibility.

"Officer Jackson was an exemplary officer who was well-liked by his colleagues," said Deputy Mayor Jared Nieuwenhuis, who spoke on behalf of the City Council at the beginning of its regular Monday evening meeting. "He frequently volunteered for community events, always proud to show off his motorcycle to all the young kids. Our hearts go out to his family and his colleagues in the department. We mourn your loss and stand by you during this difficult time."

Jackson grew up in Spokane and graduated from Issaquah High School and Central Washington University. His wife and two young children survive him.

Funeral arrangements were being made Monday, and will be announced once they are finalized.