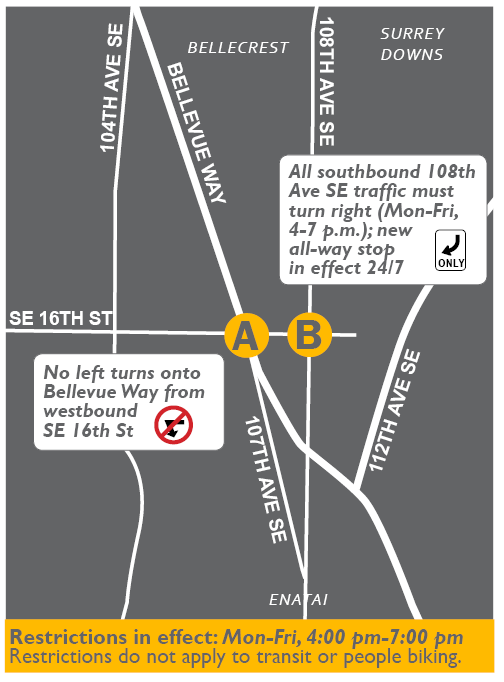 Since the implementation of the pilot in fall 2017, decreases of afternoon traffic on 108th Ave. SE, south of Main St., have been documented. There has not been a corresponding increase in traffic in the Enatai neighborhood that would indicate commuters are instead cutting through that neighborhood. The city has determined to continue the pilot through 2020 when it is anticipated that light rail construction activities occurring on Bellevue Way SE and 112th Ave. SE will end.

Current features of the pilot program as noted in the map include:

Enforcement will occur as resources allow.

Let us know your experiences and observations with the pilot project by completing a short survey. .

The Neighborhood Traffic Mitigation Committee has been extremely sensitive to recommending mitigation that is intended to discourage commuter traffic and recognizes how mitigation also impacts residents. While the pilot restrictions come with changes for residents in accessing their neighborhoods, the intent is to discourage commuter traffic from using neighborhood streets to reach their destination.

See the "Frequently Asked Questions" below.

Have the turn restrictions been effective in discouraging evening commuter traffic?

Yes. Since the initial pilot started in Sept. 2017 and modified in Jan. 2018, a considerable decrease in traffic volumes on 108th Ave SE have been noted through traffic studies.

The results of an Oct. 2018 traffic volume study and previous studies are summarized here.

What changes are being made to the pilot program?

The city evaluated these modifications through June 2018 through traffic volumes, enforceability and community sentiment and has determined to continue the throughout the duration of East Link construction on Bellevue Way SE and 112th Ave SE when the roads are anticipated to be restored in 2020.

How long will the pilot program be in place?

The city has continually evaluated the pilot program through traffic volumes, enforceability and community sentiment.

The pilot has proven effective in discouraging afternoon traffic on 108th Ave SE, south of Main St. There has not been a corresponding increase in traffic in the Enatai neighborhood that would indicate that commuters are instead cutting through that neighborhood.

The city has has determined to continue the pilot throughout the duration of East Link construction on Bellevue Way SE and 112th Ave SE when the roads are anticipated to be restored in 2020.

What are the current features of the pilot program?

Current features of the pilot include:

Why is the pilot project happening?

What was learned during the initial pilot?

How does the pilot program discourage commuter traffic in neighborhoods?

Commuters sometimes use neighborhood streets to bypass congestion on neighboring arterial streets. The pilot will discourage this activity by restricting through movements on convenient bypass streets—in this case, 108th Avenue SE between Main Street and Bellevue Way—thereby keep commuter traffic on the arterial street network. Police will help to enforce the restrictions as its resources will allow. Additionally, the restrictions will be reflecting on navigation apps routing (e.g. Waze, Google Maps), effectively removing some streets as a possible route for users of these apps.

Must all motorists abide by the restrictions?

Does this pilot apply to buses or people biking?

Yes and no. Buses and people biking are exempt from the time-based restrictions and are permitted to travel through the intersections. Signs will communicate exemption. However, the all-way intersection at 108th Ave SE/SE 16th St. applies to all motorists all of the time.

Are the turn restrictions enforceable?

Yes. Police will enforce the turn restrictions. If you are found to violate the restrictions, the infraction is $136. Enforcement will occur as resources allow.

Will the city implement a method (e.g. placard, sticker, decal) to exempt residents from the turn restrictions?

No. The issue of exempting residents from any traffic mitigation implemented during East Link construction was raised when a draft mitigation plan was presented to impacted neighbors in Sept. 2016. The city advised the NTMC that there are many challenges with such a system:

For these reasons, a placard system is not prudent or plausible for the city to pursue.
.

What feedback has been received about the pilot?

The Neighborhood Traffic Mitigation Committee has been extremely sensitive to recommending mitigation that is intended to discourage commuter traffic and recognizes how mitigation also impacts residents. While the pilot restrictions come with changes for residents in accessing their neighborhoods, the intent is to discourage commuter traffic from using neighborhood streets to reach their destination.

Public comments are valuable in evaluating the effectiveness of the turn restriction. Comments received to-date are below. Updates will be posted periodically.

At its September 28, 2017 meeting, the Neighborhood Traffic Mitigation Committee was presented with:

Of 1,700 mailers sent to addresses within the Bellecrest, Surrey Downs, and Enatai neighborhoods and Beaux Arts Village, a little more than 60 individual comments were received in the initial weeks of the pilot. The majority of comments were from area residents. Most comments expressed frustration for having to re-route routine trips which take longer than prior to the turn restrictions being implemented.

Traffic data from the initial phase of the pilot shows an overall decrease in evening and daily volumes at key locations near the turn restrictions.

Additional comments were received after Oct. 25, 2017.

During the second phase of the pilot, the city will monitor traffic volumes, enforce the restrictions when police resources allow and gather community feedback.

Can the pilot turn restrictions be made permanent?

The pilot—and all work associated with the Neighborhood Traffic Mitigation Committee—is temporary in nature and is only be considered while East Link light rail construction is underway on Bellevue Way and 112th Avenue SE.

What if my navigation app directs me through the intersection in contradiction of the advisory signs?

A moving violation is $136 and a mark on your driving record.

I either live south of these restrictions or am trying to travel south through this area between 4 to 7 p.m. Monday through Friday. How do I get to where I’m going?

If you use 108th Avenue SE and/or SE 16th Street between Main Street and Bellevue Way to get to Enatai, and/or I-90, you will likely have to find alternative routes. Fortunately, there are numerous other ways to get to I-90 such as traveling on Bellevue Way from downtown, using 112th Avenue SE to Bellevue Way, or using one of the downtown entrances to I-405.

The modifications being made in mid-December permit westbound SE 16th Street access across Bellevue Way into Enatai; left turns onto southbound Bellevue Way are still prohibited.

Since the closure of the South Bellevue Park and Ride in May 2017, the overall traffic flow on Bellevue Way SE has been functioning better.

How was the pilot program developed?

Through its discussions, the Neighborhood Traffic Mitigation Committee recognized that a pivotal point of traffic impacts could be at the intersection of Bellevue Way and 108th Avenue SE and originally proposed turn restrictions there.

The Police Department advised enforcement would be difficult on Bellevue Way and cautioned that implementing restrictions would mean officers having to pull over drivers onto Bellevue Way, which would compound traffic issues.

In light of the Police Department’s advisement, city staff proposed pilot turn restrictions north of the Bellevue Way/108th Ave SE intersection and presented it to the Committee.

Although not all Committee members supported the initial pilot program, there was recognition that mitigation should be in place because construction was happening on Bellevue Way and began on July 31, 2017 on 112th Avenue SE.

The initial pilot was launched in Sept. 2017 and modified in Jan. 2018 based on community feedback. It was evaluated through traffic studies, operations, and feedback. The pilot will be continued through 2020 when it is anticipated that construction on Bellevue Way SE and 112th Ave SE will end and the roadways will be restored.

How is the City informing the community about the pilot program?

City staff are reaching out to properties adjacent to the area where the turn restrictions will be implemented, neighborhood association leadership, Bellevue High School and other stakeholders.

Public information will be released through city communications tools including: