The Bellevue Way Southeast HOV project (video) calls for widening the street to create a southbound, high-occupancy-vehicle (HOV) lane. The lane would run from the “Y” intersection at 112th Avenue Southeast to the main entrance of the South Bellevue light rail station (formerly the South Bellevue Park-and-Ride). A shorter version would run from the Winters House to the light rail station.

Work on the project is on hold. Based on city's adopted 2019-2025 capital budget, design work and right-of-way acquisition would resume in 2023 for Phase 1, from the South Bellevue Park and Ride to Winter’s house. Construction is not yet funded, but the City will continue to pursue funding and partnership opportunities. 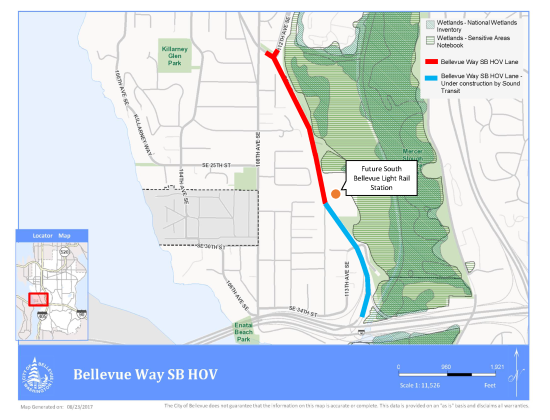 As Bellevue has grown, traffic has increased along Bellevue Way Southeast and the city has explored options to build a new southbound HOV lane. The new lane would increase capacity for traffic leaving downtown and improve transit speed and reliability.

If fully funded, the project would include a new 12-foot-wide, southbound HOV lane, two 11-foot-wide general-purpose lanes to replace the existing ones, and a five-foot wide planter at the base of a retaining wall. It will run from near the historic Winters House to the future South Bellevue light rail station (formerly a park-and-ride lot). There, it will connect to the section of Bellevue Way, including an HOV lane that extends to I-90, being built by Sound Transit.

Design work also included a second project phase, which would extend the HOV lane from the Winters House to just north of the “Y” intersection at 112th Avenue Southeast. It would be funded and built following completion of the first phase. 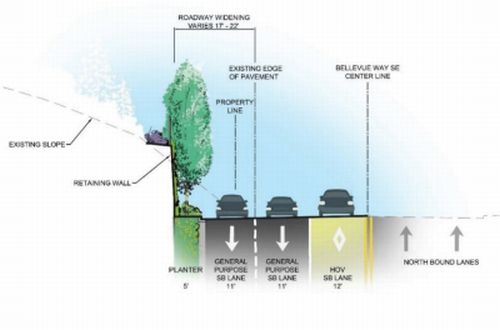 Rendering of one option: 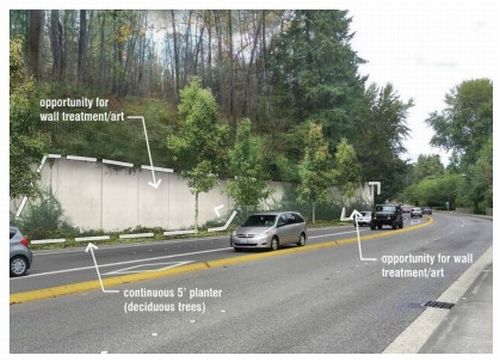 The budget for the design phase, environmental documentation and public involvement through 2017 was $4.4 million. Additional funding will be needed for right of way acquisition and construction.

Several open houses have been held to collect community feedback. Outreach materials from the events include: