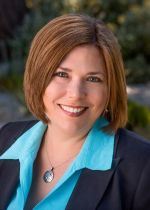 Jennifer was part of the council’s Light Rail Leadership Group, which negotiated the $160 million East Link tunnel funding agreement, cost-sharing and final route alignment. Due to her advocacy, at-grade crossings were largely eliminated from the plans for the route in Bellevue. Jennifer also co-authored the council’s 20-year vision for Bellevue, which has helped drive the city’s agenda since it was adopted in 2014.

Jennifer is an attorney specializing in land use and municipal law and practices with Inslee, Best, Doezie & Ryder, PS in Bellevue. Prior to joining the City Council, she served on the Bellevue Planning Commission for six years, including a term as chair, and co-chaired Bellevue’s Light Rail Best Practices Committee.

Councilmember Robertson volunteers in Bellevue schools, and served as a member of its Fiscal Advisory Committee. She was a member of the Bellevue Philharmonic Orchestra Board of Directors. She has been an active Girl Scout volunteer since 2004 and has been a troop leader since 2011.

She and her husband Scott reside in the Somerset neighborhood and have three daughters.