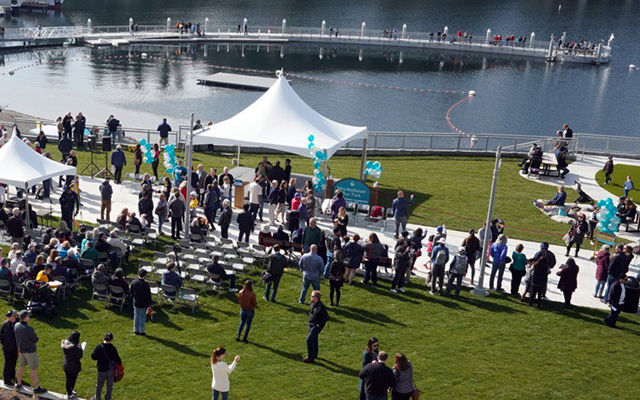 Decades after the city began planning a major waterfront park along Meydenbauer Bay, residents got to enjoy the reality Saturday, March 16, at a community celebration of the new seven-acre park.

With a quarter mile of waterfront, the new Meydenbauer Bay Park increases coveted public access to the water, strengthening connections between Lake Washington and the bustling downtown.

The park also will be the starting point of the Grand Connection, a vibrant pedestrian corridor planned to extend east through downtown, across Interstate 405 to connect in the Wilburton neighborhood with the Eastside Rail Corridor, a regional pedestrian-bicycle trail.

“For decades, the city has envisioned creating a signature park and waterfront experience,” said Mayor John Chelminiak. “The new park is the start of reconnecting Meydenbauer Bay to downtown – a bold, audacious and transformative vision.”

The new park includes what property that used to be Meydenbauer Beach Park, relocating and expanding its public swimming beach and adding a new beach house with restrooms and showers. Other key features of the new park include:

Originally the birthplace of Bellevue in the early 1900s, Meydenbauer Bay has a rich history. From 1914 to 1952, the inlet was the off-season home to a whaling fleet that plied Alaskan waters.

In 1987, Bellevue officials made acquisition of Meydenbauer Bay waterfront a major focus of the city’s Park, Recreation and Open Space Plan. Between 1992 and 2007, the city acquired 12 properties along the bay, adding to land that King County transferred to Bellevue when the city was incorporated in 1953. The city purchased the Bellevue Marina in 1992.

Future phases will continue transforming the waterfront along the marina and up to Main Street, creating a critical connection to downtown.