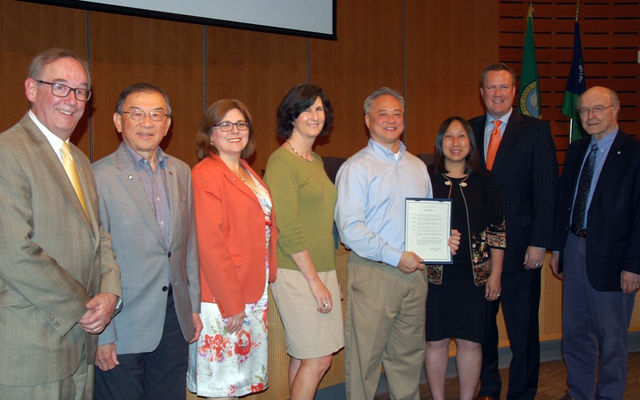 On Monday night, the City Council unanimously adopted an updated Council Vision statement and priorities for 2018-20. The new vision priorities maintain Bellevue’s emphasis on embracing diversity and being “the city where you want to be.”

The three-year priorities touch on a number of important policy issues facing the city. Each one is aimed at helping achieve the Council Vision (Bellevue 2035 – The City Where You Want to Be). They range from executing phase one of the Affordable Housing Strategy and continued oversight of light rail construction to working toward a solution for the permanent men’s shelter and implementing hearing accessibility at all city public meeting areas.

The council first created a 20-year vision and seven strategic target areas for Bellevue in 2014. A later update was adopted by councilmembers in 2016.

The full text of the updated Council Vision and three-year priorities can be found in the agenda packet materials.

Earlier at the study session, councilmembers discussed details and potential changes to the draft citywide Land Use Code Amendment (LUCA) for shelters. The conversation touched on several topics, including the purpose statement, definitions section, permitting process and submittal requirements. Councilmembers are expected to discuss the topic again on May 21.

The Land Use Code is a permitting tool that governs the location, design and approval process for development in the city. A LUCA will add regulations to the code to determine how and where a shelter for individuals experiencing homelessness can be sited in Bellevue. Earlier this year the council announced it would begin the process of creating a permanent LUCA for homeless shelters. The goal is to create permanent citywide regulations for adoption by the August recess. A public hearing is tentatively scheduled for June 11.

The full conversation is available online through Bellevue Television. Additional background, including the draft LUCA, are in the agenda packet materials.

The council awarded a contract to install the first bike lanes that run the length of downtown. Apcon Tech Inc. won the contract for $365,933, plus taxes. The demonstration bikeway project on 108th Avenue Northeast, from Main Street to Northeast 12th Street, will include bike lanes in each direction.

Construction is scheduled to begin in June and wrap up in July, about two months later than originally anticipated. Staff will evaluate the effectiveness of this project over a one-year period and report the results back to the Transportation Commission and council. In a related action, the council awarded a separate contract in the amount of $294,487, plus tax, to NPM Construction Co. for bicycle improvements on five corridors citywide.

The downtown bikeway project is fully funded by the voter-approved Neighborhood Safety, Connectivity and Congestion Levy. Like other levy-funded bicycle projects, it’s moving from planning to design to construction in one year. The citywide bicycle improvement project is 90 percent funded through the levy. In 2018, the city aims to open 19 miles of new bike lanes.

Councilmembers also took a few moments to proclaim May as “Asian Pacific American Heritage Month.” The commemorative period recognizes the generations of Asian and Pacific Islanders who have enriched America’s history and are instrumental in its future success.

Approximately 39.5 percent of Bellevue’s population is comprised of Asians or Pacific Islanders, the largest percentage enjoyed by any city in Washington state. The full proclamation is available.