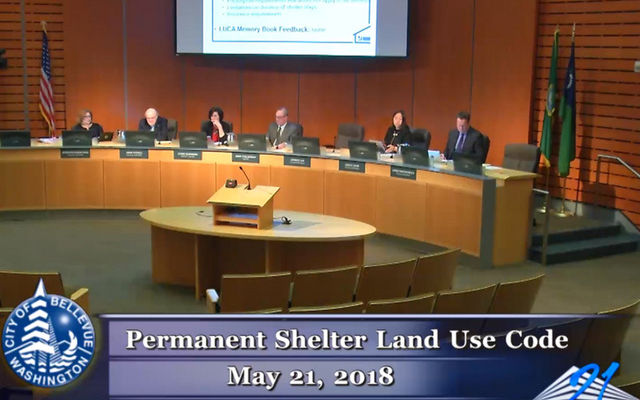 On Monday night, councilmembers resumed their discussion of the draft Land Use Code Amendment (LUCA) for homeless services uses, which include permanent shelters and day centers to serve individuals experiencing homelessness. The presentation and conversation hit on a number of topics, including definitions, submittal requirements for applicants, the Good Neighbor Agreement Advisory Committee makeup and separation or “buffer” distances from certain land uses. The City Council later voted to set a public hearing on the draft LUCA for June 11.

The Land Use Code is a permitting tool that governs the location, design and approval process for development in the city. A LUCA will add regulations to the code to determine how and where a shelter for individuals experiencing homelessness can be sited in Bellevue.

Earlier this year, the council announced it would begin the process of creating a LUCA for permanent homeless shelters. The draft LUCA is a direct result of a robust public outreach effort which occurred throughout March and April. The initiative included a citywide online survey, one large workshop at City Hall, an optional “listening session” and two “Q&A sessions” at local community centers.

For the June 11 public hearing, the council has asked for feedback on two specific issues: 1) whether background checks and/or warrant searches should be included as part of the security plan for granting access to shelter and 2) whether the code should include buffers or separation requirements from sensitive uses.

Adoption of the draft LUCA could take place as early as June 25. No site selection for a proposed homeless shelter is being made at that time.

The full conversation, which extended into the later part of the regular session, is posted online through Bellevue Television. Additional background, including the draft LUCA, is in the agenda packet materials. An interactive map that illustrates buffer distances is also available for the public to view online.

Later, as part of the consent agenda, the council voted to adopt an update to the city’s Shoreline Master Program (SMP). The vote marks the conclusion of a 10-year process and, as part of an agreement with the state Department of Ecology, will the allow Bellevue to forgo another state-mandated update for eight years.

SMPs are local land-use policies and regulations that guide use of shorelines throughout the state and are reviewed and approved by the Department of Ecology. The new update includes changes to nonconforming regulations, dock standards and shoreline stabilization.

Bellevue has been working on a comprehensive update to its SMP since 2008. On June 1, 2017, the Department of Ecology conditionally approved the city’s updated version. In January, an agreement in principle was reached on how to address some required changes. Then in April, the Department of Ecology sent a letter to the city encouraging the plan’s adoption. A public hearing was held on May 7.

Also on the consent agenda, the council authorized the city manager to sign a Memorandum of Understanding (MOU) with King County, Kirkland and Redmond to continue exploring the feasibility of developing aquatics facilities for the Eastside. The MOU represents only a commitment to participate in collaborative planning work and does not obligate any party to develop aquatics facilities, nor does it preclude any other potential partnerships for the city.

Monday’s action is a follow-up from a briefing the council received back in March. The lack of aquatic facilities on the Eastside has been an ongoing discussion in the community for over a decade. Despite the popularity of swimming and other water sports, the last public pool facility to be built in Bellevue was in 1970.

More background and a draft of the MOU is in the council agenda packet.

The council proclaimed May 20-26 as National Public Works Week, noting the “contributions that public works officials make every day to our city’s health, safety, comfort and quality of life.”