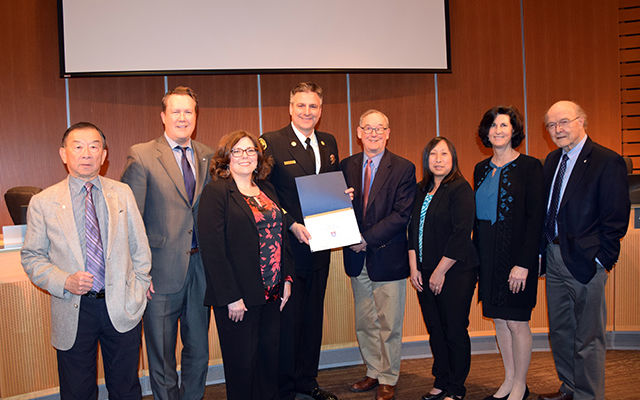 Staff presented the affordable housing strategy update in response to a request from Deputy Mayor Lynne Robinson. In addition to giving a count of how many affordable units have been added, staff showed how many are near East Link station locations (152), and the work program for implementing the remaining actions in the strategy.

The affordable housing strategy, a council priority, is intended to improve affordable housing opportunities throughout Bellevue. Having affordable places to live for people of all income levels sustains Bellevue’s livability and economic vitality. All councilmembers expressed support for the progress so far.

Community Development staff will come back to the council on an unspecified date later this year. More details about Monday’s presentation are available in the meeting materials.

The council honored Fire Chief Jay Hagen Monday for earning the designation “Chief Fire Officer” from the Center for Public Safety Excellence. Only 1,344 out of the 29,000 chief officers in the nation’s fire departments – less than 5 percent – have received the credential.

To earn the CFO credential, Chief Hagen underwent a peer review of his experience, education, professional development, community involvement and technical competence. He took over the Bellevue Fire Department last year after 30 years with the Seattle department, where he was a deputy chief.

In a brief statement, Chief Hagen said his position with the Bellevue department, considered one of the most advanced in the country, was key to him receiving this credential. Details are included in the management brief.